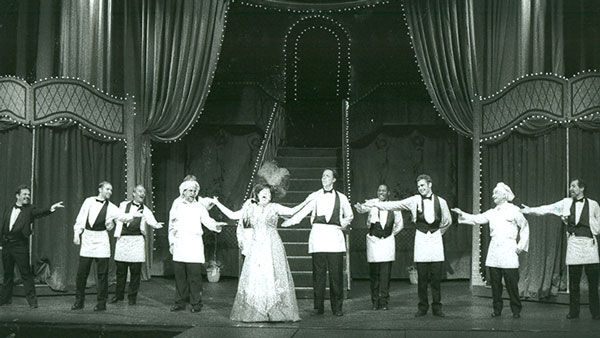 The Broadway Rose’s first five seasons were full of optimism, creativity, and pluck. The company’s four co-founders accomplished a near miracle in starting a new theatre in Tigard. The next five seasons would prove to be a transitional period for the company. After Co-Founders Matthew Ryan and Joe Morkys left Broadway Rose and returned to New York in 1996, Artistic Director Sharon Maroney and General Manager Dan Murphy remained to keep the organization running. “It was scary,” says Murphy. “Sharon and I had a lot more responsibility, and still had so much to learn about running a nonprofit arts organization, but we were determined.”

In 1997 the company’s “administrative office” was still running out of the Maroney/Murphy kitchen. So when Sharon hired the first part-time administrative assistant, Linda Jones, it was not uncommon for Sharon to greet her in the morning wearing her bathrobe and slippers. “The line between professional and personal was definitely blurred,” jokes Maroney. “We lived and breathed Broadway Rose around the clock.”

That summer Shoshana Bean, who would become famous for portraying Elphaba on Broadway in the musical Wicked, starred in the Broadway Rose production of Bye Bye Birdie. “I remember Shoshana auditioning for us that summer – she knocked her audition right out of the park,” says Maroney. “She was a real talent as a young performer. It’s been wonderful to watch her Broadway career grow and the success she has had with her singing career.”

Pearson Financial Group increased their sponsorship support by buying out an entire performance and making the tickets available to their clients, a practice that remains in effect today. Broadway Rose experimented with running the season in repertory so that each show could run for a longer period of time, building momentum through word of mouth to help with ticket sales. However, the repertory schedule was so labor intensive that it ended after four seasons. Also in 1997, the first children’s drama camp was held for Cinderella.

In 1998, Broadway Rose moved its offices into space in Platt Electric’s Tualatin branch. “This was a huge step for us,” recalls Maroney. “Taking the operation out of our home and into dedicated offices helped us become more professional.” Sharon also endeavored to kick up the production values for the summer production of Hello, Dolly! and rented a costume package and a set from Santa Barbara Civic Light Opera – a first for the company. Dan directed the production and Sharon starred as Dolly Levi. The Oregonian review called it “big, broad, and full of brass.” A second drama camp and children’s show were added.

Broadway Rose’s annual budget rose to around $175,000 in 1999 with ticket sales accounting for just under half of the total. Dan’s general manager position officially became funded, finally making him an employee rather than a volunteer. In 2000, Sharon reached out to members of the business and artistic community for assistance in marketing the shows. A committee was formed to help infuse Broadway Rose’s marketing plan with some new approaches, including the first season announcement event (now known as Curtain Up).

In 2001, Meyer Memorial Trust awarded Broadway Rose a $90,000 three-year grant, allowing the company to hire Alan Anderson as Marketing Director. Broadway Rose held its first New York auditions for its upcoming production of Phantom and hired William Broderick and Portland native Kelly Jeanne Grant (then Fleck) to star in the show. Kelly would return to Broadway Rose twice more over the years and would go on to tour the nation as Christine in Phantom of the Opera and perform on Broadway in Company and Phantom of the Opera. Phantom was a turning point for the company both artistically and financially. July 8 goes down in history as the first sold out show – with nearly all of the remaining performances selling out. “Phantom Phever,” as coined by the box office staff, energized the company. The show won two Drammy Awards: Actress in a Musical for Grant, and Musical Direction for Tracey Edison. Ticket sales increased 60% over the previous year. Broadway Rose presented its first holiday show at Tualatin High School auditorium, the world premiere of A Taffeta Christmas, which won a Drammy Award for Best Ensemble.

As the tenth season concluded, it felt as though the transitional period had come to an end. The audience was growing, there was a reserve in the bank, and the company was receiving artistic accolades. The company was hopeful that growth and new opportunity would continue the next five years.