With a handful of members and a dwindling budget, the Cuyahoga High Marching Band is facing imminent extinction. New student Jake, a reluctant addition to the ranks, is stuck between a rock and a hard place while flute player Laura is struggling to shine among her more scintillating peers. Can the newly appointed captain and tuba-player, Elliot, keep them all together? Along with a collection of vibrantly colorful fellow band members, the trio come to learn that letting their geek-flag fly can be one heck of a good time.

Ryan Andrews (Elliot) is very excited to make his Broadway Rose debut! Past credits include: Spamalot at Lakewood Theatre Company and Bye Bye Birdie, The Drowsy Chaperone, and Carousel at The Huron Playhouse in Huron, Ohio. Ryan is a graduate of Millikin University with a B.F.A. in Acting.

While at Millikin University he appeared in Macbeth, The Last Days of Judas Iscariot, and Much Ado About Nothing. He wants to thank his family for their constant love and support.

Erin Charles (Nicole) is so happy to be back at Broadway Rose! Previous shows here include Celebrate Home and The Honky Tonk Angels. Erin just finished her second run as Belle in Pixie Dust Productions’ Disney’s Beauty and The Beast. Other Portland credits include Dorothy in The Wizard of Oz, Vivienne in Legally Blonde (Pixie Dust), Queenie in The Wild Party (Live On Stage), Witch in Into The Woods (Lakewood Theatre), Heidi in [title of show], Mary Lane in Reefer Madness the Musical, and Nellie in Floyd Collins (Stumptown). When not on stage Erin enjoys working in special education and spending time with her modern family. “Love and thanks to Greg for always being supportive and to Preston for letting his mom live the dream!”

Max DuBowy (Stewart) is delighted to join the cast of Band Geeks! at Broadway Rose. Portland area theater credits include Cats at Broadway Rose and Spamalot and White Christmas at Lakewood Theatre Company. Originally from San Francisco, Max studied at the American Conservatory Theatre, Idyllwild Arts Academy (Class of 2008), and Broadway Theatre Dance Workshop. He also earned his bachelor’s in psychology from UNLV. “A huge thank you to Isaac Lamb and Mont Chris Hubbard for the opportunity to be a geek, and Sharon Maroney and Dan Murphy for producing fabulous musicals for the community. Cheers to family, friends, and the audience!”

Emily Eisele (Natalia) is delighted to be performing with Broadway Rose for the first time. Though she is new to the Oregon theater scene, Emily recently appeared as the Baker’s Wife in the Village Players’ production of Into The Woods and is excited to continue pursuing theater, music, and film opportunities in the Portland area this year. A Colorado native, Emily has performed with Fort Lewis College, the Durango Arts Center, Fort Collins Children’s Theatre, and Rabbit Hole Radio Theatre, to name a few. Favorite projects include Little Women: The Musical (Beth), Into The Woods (Cinderella), Metamorphoses, and the radio series Mythologica. Emily would like to thank her extended theater family for making life infinitely more interesting, colorful, and ridiculous; she can’t imagine having it any other way.

Amy Jo Halliday (Ms. Dixon) National Tour: Christine Daae in The Phantom of the Opera. Recent credits: Mrs. Potts in Disney’s Beauty and the Beast with Pixie Dust Productions. Also with Pixie Dust: Paulette in Legally Blonde (Drammy Award), Grizabella in Cats and Rita in Lucky Stiff with Broadway Rose, Maria Callas in Ari-Maria with triangle productions!, and Judy in 9 to 5 the Musical with Stumptown. Amy Jo has been a guest soloist with the Mormon Tabernacle Choir (Music and the Spoken Word), Phoenix Symphony, and Oregon Symphony (Pops & Classical series). She has been heard on national television as the singing voice for a Mountain Dew commercial. Amy Jo has a Bachelor’s degree from Arizona State University and a Masters Degree from Portland State University. She lives in Keizer with her darling husband and their four beautiful children.

Peter Liptak (Spitz) is so stoked to make his Broadway Rose debut with Band Geeks! Past roles include Jesus in Godspell (Pacific Stageworks), Kippy in Take Me Out (Three Rooks Productions), Charlie in You’re A Good Man Charlie Brown (Diversity Players), and Daniel in Once On This Island (Spokane Civic Theater).

Peter is dedicating this performance to Mr. Burpee, Mr. Felton, Mrs. Medellin, and all the other band teachers that gave so much to teach him in junior high and high school.

Ryan Monaghan (Kyle) is excited to be returning to Broadway Rose after his debut in My Fair Lady last summer. A recent college graduate with a B.F.A. in Musical Theater Performance, Ryan has been very fortunate to work with Lakewood Theatre Company (White Christmas), Leavenworth Summer Theater (The Sound of Music, Thoroughly Modern Millie, Annie Get Your Gun), Tacoma Musical Playhouse (South Pacific), Encore! (High School Musical 2), Central Theater Ensemble, and many more! Ryan would like to thank his friends and family for their incredible support!

Danielle Purdy (Laura) is thrilled to be making her Broadway Rose debut! Local credits include Sophie in David Jacobi’s Mai Dang Lao at JAW 2013 (Portland Center Stage), Evie/Pixie the Cat in the world premiere of Andrea Stolowitz’s Ithaka and Lauren in Circle Mirror Transformation (Artists Repertory Theatre), Ilse in Spring Awakening and the 2013 edition of 4×4=8 Musicals (Live On Stage), and Bloody Bloody Andrew Jackson and Belle in A Christmas Carol (Portland Playhouse). Danielle has a B.A. in Vocal Music Performance and a M.Sc. in Music in the Community from the University of Edinburgh in Scotland. Danielle’s Master’s dissertation involved designing and directing a musical theater production for adults with PTSD and developmental disabilities in Bosnia.

Claire Rigsby (Molly) an Atlanta native, is thrilled to be making her Portland debut at Broadway Rose. Claire graduated from Emory University with majors in Theatre Studies and Psychology. Since graduating, she has worked at The Alliance Theatre, Georgia Shakespeare, Georgia Ensemble Theatre (where she traveled her show to Beijing, China), Synchronicity, The Academy Theatre, and Saïah in Atlanta, GA. The B Street Theater in Sacramento, CA brought her to the West Coast, where she was a 2012-2013 apprentice. After Sacramento, Claire bought a 21’ RV (The Claire-a-van) and traveled around the west all summer until she ended up in Portland. She’s so glad she decided to stay! Thanks to Broadway Rose, and her family and friends for all their support.

David Swadis (Alvin), originally from Philadelphia, earned his A.F.A. in Acting from Cumberland County College. While in school, he was a finalist (Top 16) for Region 2 of The Kennedy Center American College Theatre Festival’s Irene Ryan Acting Scholarship competition. Credits include Lumiere in Beauty & the Beast, the Emcee in Cabaret, Chip Tolentino in The 25th Annual Putnam County Spelling Bee, Eddie in Damn Yankees and Andy Lee in 42nd Street. David was most recently seen on stage in Troll 2: The Musical here in Portland. David would like to thank Kelly, Reese’s Peanut Butter Cups, Deb, Crissy, Roz, Diet Pepsi, naps, and Wednesday Addams. David would also like to thank Brian for… well, everything.

Joe Theissen (Mr. Hornsby) is thrilled to return to the Broadway Rose stage, having made recent appearances in Cats (Gus/Bustopher) at Broadway Rose, La Cage Aux Folles (Albert/Zaza, 2013 OTAS Award) at Lakewood Theatre, and Pixie Dust Production’s Disney’s Beauty & The Beast (Cogsworth). Other recent appearances include [title of show] (Hunter) with Pixie Dust and triangle productions!, and The Wizard Of Oz (Cowardly Lion, 2011 Drammy Award) and Legally Blonde: The Musical (Professor Callahan) with Pixie Dust. In addition to performing on stage, Joe is an award-winning director, studio vocalist, and educator. Joe currently teaches theater arts and music at Lake Oswego Junior High School. Joe extends huge thanks to Dan and Sharon and the Broadway Rose family…and to Isaac, Chris, Jessica, and the rest of the cast and crew. Joe holds a Bachelor’s of Arts in Music Theory and Composition (Linfield College), and a Masters in Teaching (Concordia University).

*Post-show talk-back: General Manager, Dan Murphy, will discuss how Broadway Rose found the new musical, Band Geeks! Talk-backs are free and open to the public. They begin immediately following the first Saturday matinee performance of the mainstage production, and are held in the theater. You do not have to attend the Broadway Rose production in order to attend the talk-back. 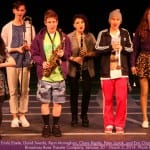 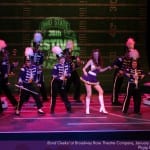 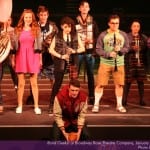 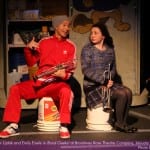 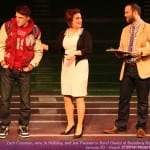 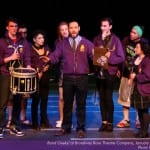 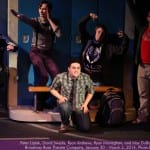 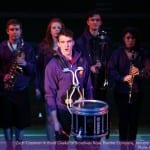 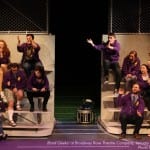 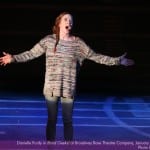 Episode 48: Disruption (includes Band Geeks! review)
By James Engberg, Eric Kilgore, and Haggis Jones
5 Useless Degrees & A Bottle of Scotch (podcast), Feb. 13, 2014
What is most successful about this production is the music…there are a couple stand-outs, particularly Danielle Purdy. Her singing ability is incredible, just first-rate…Listen here

Band Geeks! (Review)
Willamette Week
With upbeat performances and a peppy storyline, this production delivers all the way through to the grand finale, “Embrace Your Inner Geek,” an enthusiastic, confetti-strewn number…Read more

New Season, New Show, (Lots of) New Cast Members at Broadway Rose! (Review)
By Tina Arth and Darrell Baker
Westside Theatre Reviews, Feb. 3, 2014
The theme for Broadway Rose’s 23rd season is “Brass ‘n’ Sass” – and their current production of Band Geeks! is a perfect way to start the music. This captivating new show is having its West Coast premiere at the New Stage in Tigard, and authors Tommy Newman, Gordon Greenberg, Gary Alter, and Mark Allen must be thoroughly jazzed about the quality of the production…Read more.

BWW Reviews: Give in to Your Nerdy Side with BAND GEEKS at Broadway Rose
By Patrick Brassell
BroadwayWorld, Feb. 3, 2014
It’s the kind of show you start out scoffing at for its simple-minded depiction of teenage problems, but the darn thing sneaks up on you, and you walk out cheering. It owes a debt to Glee, of course, and Jason Robert Brown’s 13, but it has its own charms…Read more.

Band Geeks! includes a king, a governess and a baron
By Barbara Sherman
Regal Courier, Jan. 30, 2014
Through the magic of theater, actors transform themselves into different characters for the various roles they play, and sometimes they even take on new roles off-stage. Such is the case for the upcoming Broadway Rose production of Band Geeks!, in which longtime patrons will find some familiar faces in new settings…Read more

Theissen at home in Band Geeks!
By Barbara Sherman
Lake Oswego Review, Jan. 30, 2014
If Joe Theissen looks at ease as the high school band director in the Broadway Rose production of Band Geeks!, part of the reason might be that it is not a huge departure from his day job as the Lake Oswego Junior High School music and drama teacher…Read more.

Fairfield’s Zach Cossman Reprises His Role in Oregon Production of Band Geeks!
By Kirk Sheppard
The Sappy Critic, Jan. 26, 2014
Fairfield native and Wright State University graduate, Zach Cossman, was part of the regional premiere of the brand new musical, Band Geeks!, in June of 2012 at the Human Race Theatre in Dayton, Ohio. I saw the show and loved it! Cossman impressed in his role as Jake, the jock who reluctantly joins the band. Zach is reprising his role all the way out in Portland, Oregon beginning this week and he was gracious enough to sit down for an interview with us…Read more.