Tickets for this production will be sold employing current safety protocols. All policies are subject to change based on evolving guidance from Washington County, the State of Oregon, and the CDC. We thank you for your flexibility and understanding as we navigate in-person programming during the pandemic.

A message on safety: Per Oregon’s indoor mask requirement, all guests and staff must wear a mask in the theater. In addition, Broadway Rose is requiring proof of full COVID-19 vaccination OR proof of a negative COVID-19 test within 72 hours of the performance for anyone not vaccinated. Proof of vaccination or negative COVID-19 test along with photo identification will be checked at the door prior to entry. Our artists have been vaccinated and actors are not required to wear masks while performing. Note: Tickets will be sold up to full seating capacity without spacing between parties. To learn more about Broadway Rose’s extended safety measures click here.

Bitter miser Ebenezer Scrooge has nearly humbugged his way through another Christmas Eve when the specter of his former partner, Jacob Marley, appears to warn him that three spirits will visit in the night to lead him through Christmases past, present, and future. Through a sweeping score and whimsical storytelling, Scrooge seeks redemption for his selfish ways in time for a happy Christmas Day – lest he doom himself and others to a more chilling fate.

Run time is approximately 1 hour and 30 minutes with no intermission.

This holiday musical is suitable for most audiences.Click here for a pre-viewing guide for sensory- and content-sensitive patrons. (PDF) 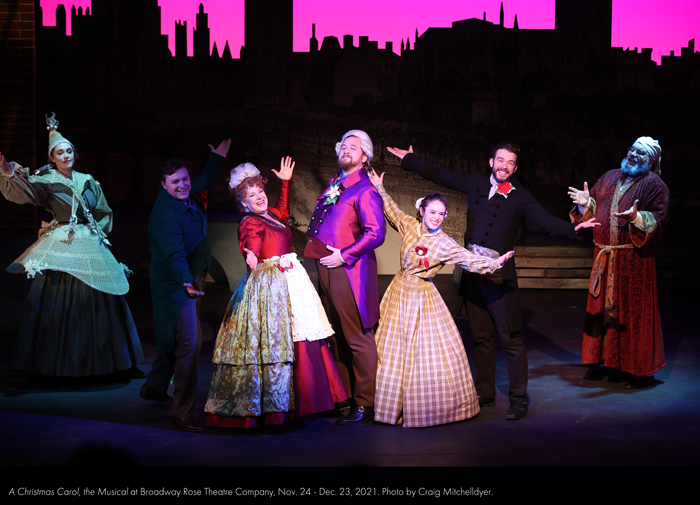 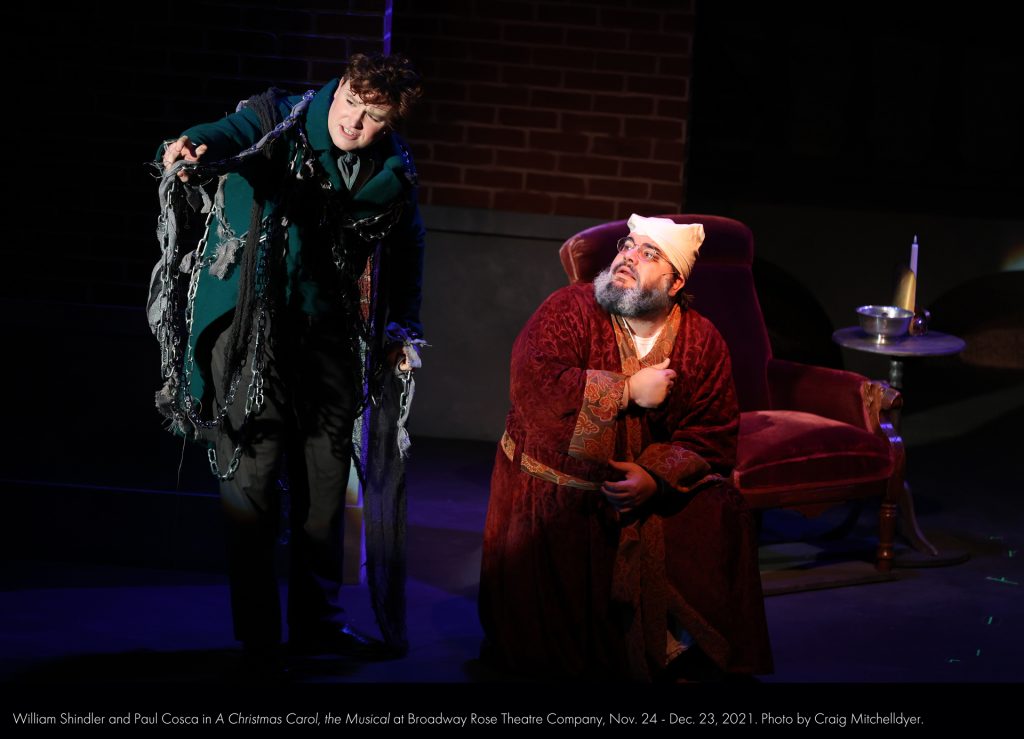 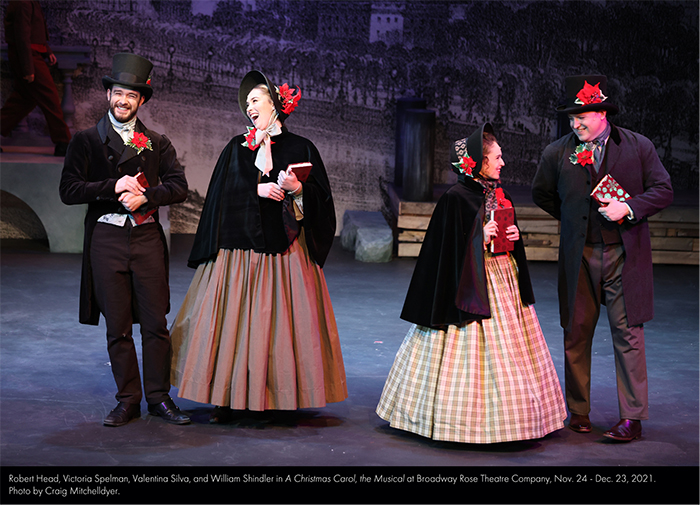 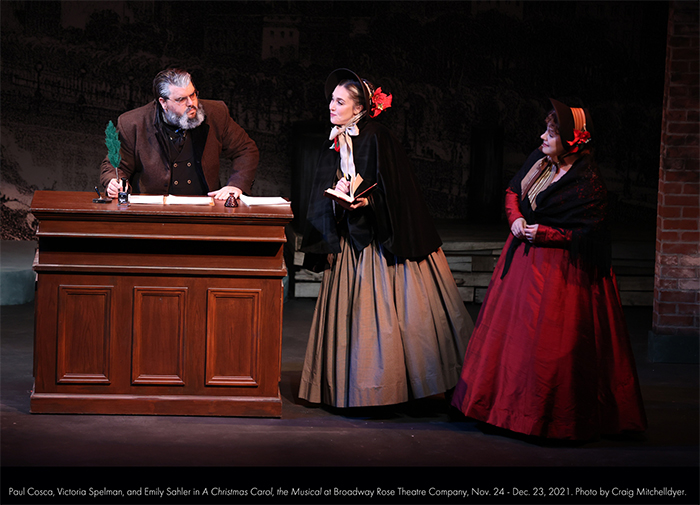 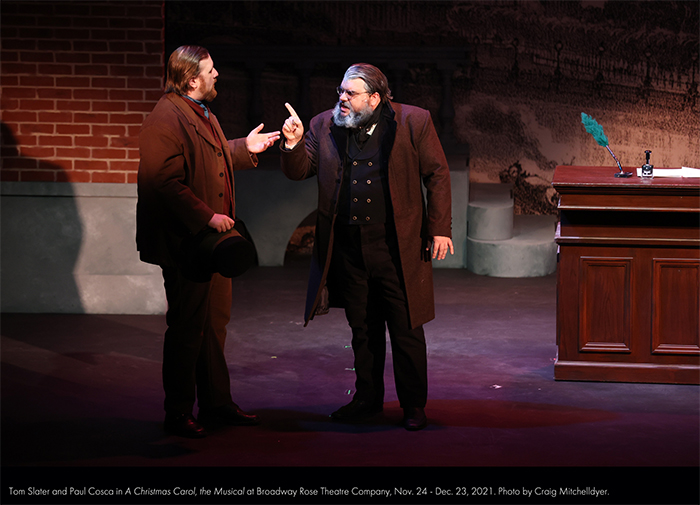 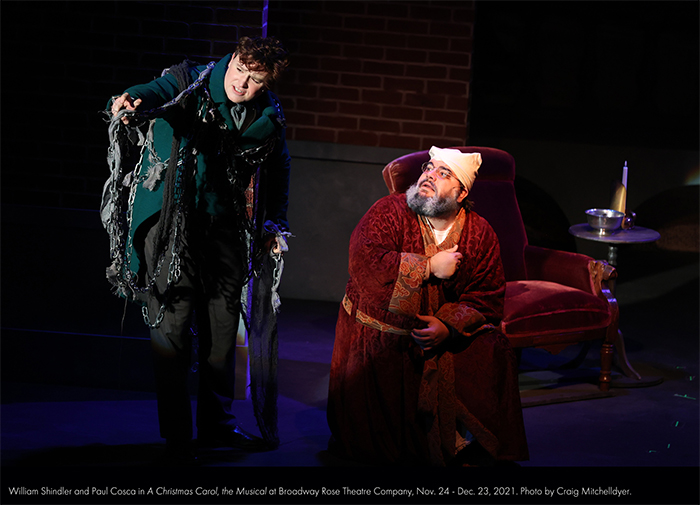 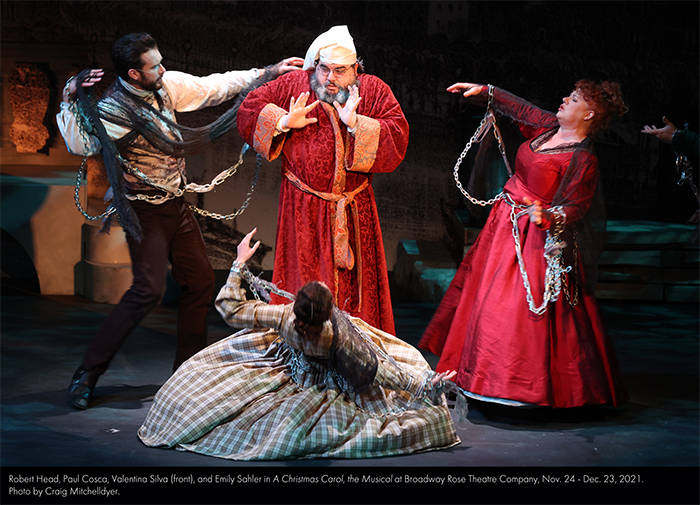 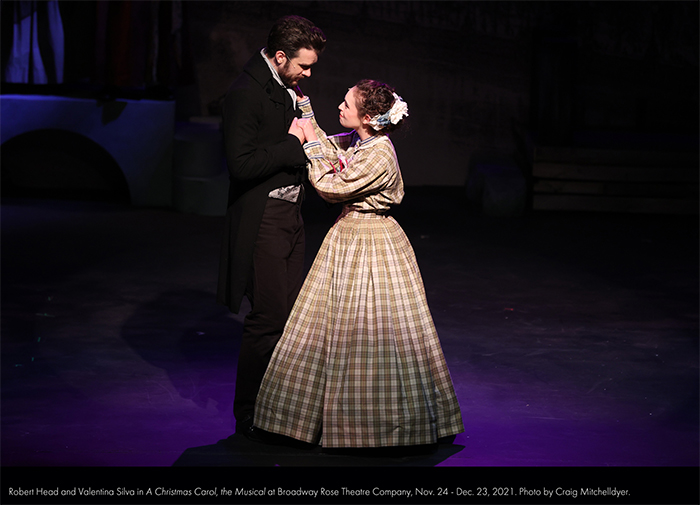 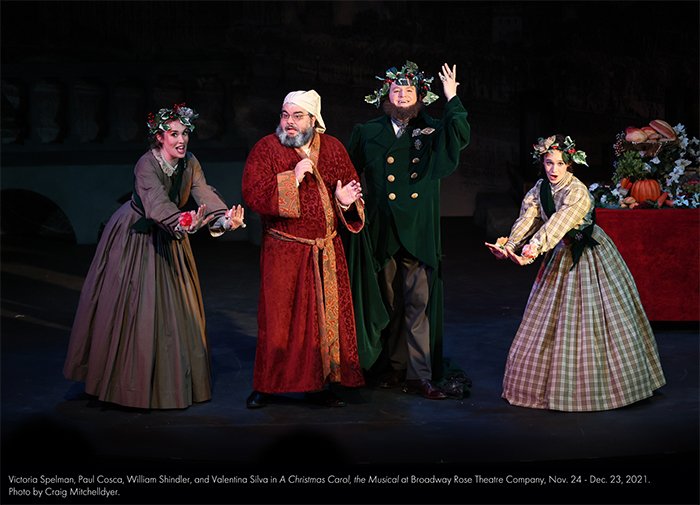 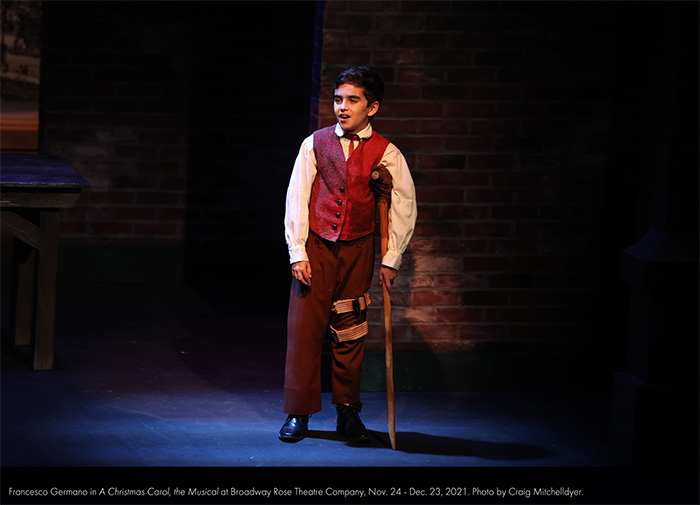 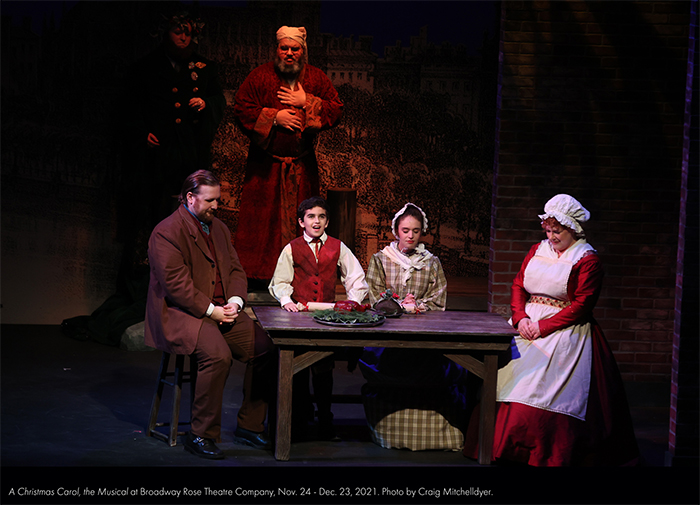 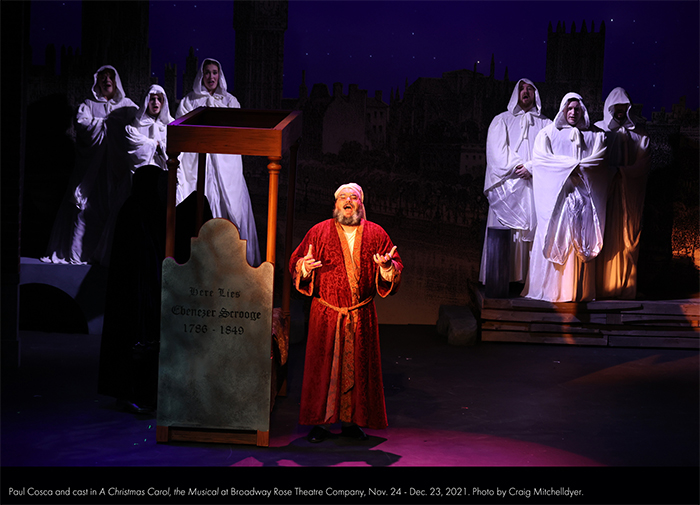 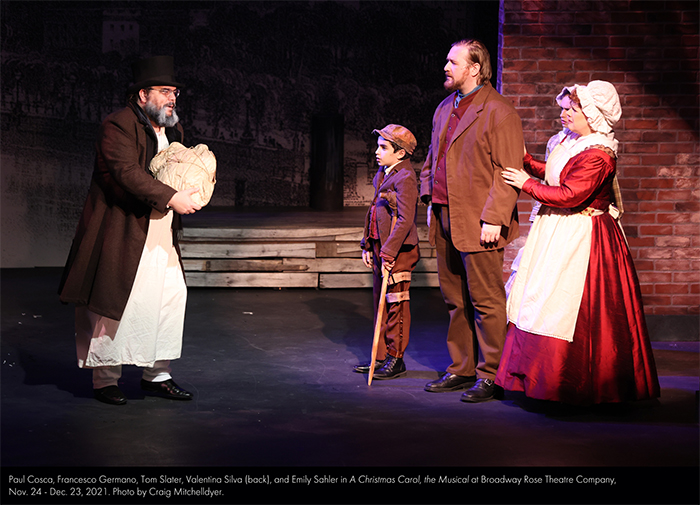 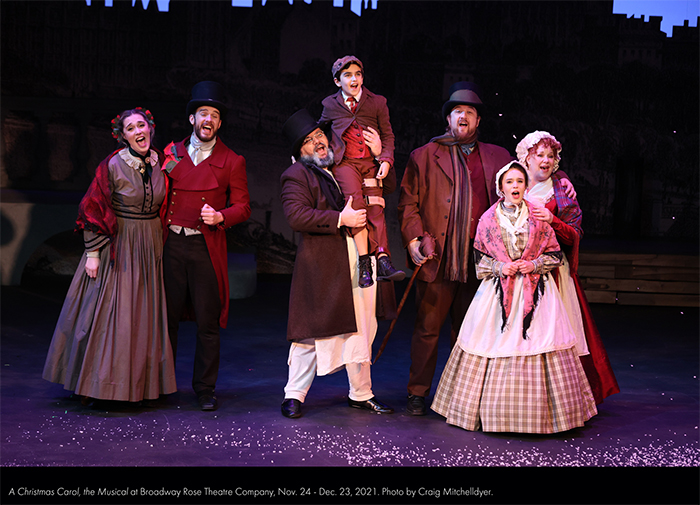 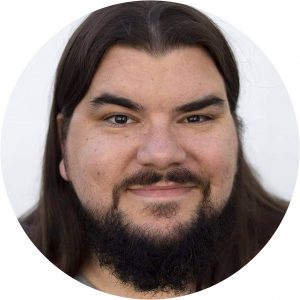 Paul is very proud to make his Broadway Rose debut in one of his favorite shows. Paul is an actor, director, playwright, composer, and (since the world flipped upside down) an artisan. Portland area credits include Audrey II in Little Shop of Horrors (Magenta Theatre), Neville in The Mystery of Edwin Drood (Metropolitan Performing Arts Community Theatre) and Victor in Frankenstein (The Modern Prometheans). Other Oregon credits include Frollo in The Hunchback of Notre Dame and The D’Ysquith Family in A Gentleman’s Guide to Love and Murder (Camelot Theatre) and Nicky/Trekkie in Avenue Q (Oregon Cabaret Theatre). He is also the host of a weekly Dungeons & Dragons livestream on YouTube called The Adventurers Guild. You can find out more at www.paulcosca.com 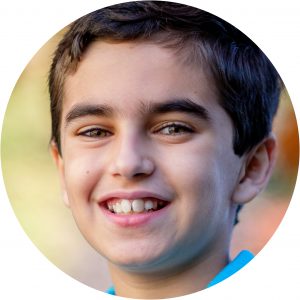 Francesco Germano as Tiny Tim and others

Francesco is excited to make his stage performance debut with Broadway Rose in A Christmas Carol, the Musical. He is currently in the 5th grade and explores his love of music by taking piano and drum lessons. He hopes to continue to grow as a musician and performer through shared experiences such as these. 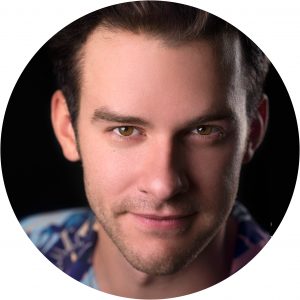 Robert Head as Fred, Young Scrooge, and others; Choreographer 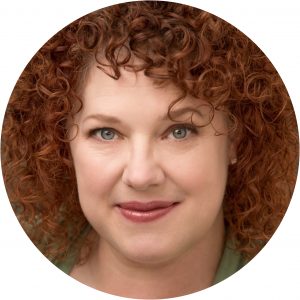 Emily Sahler as Mrs. Cratchit, Mrs. Fezziwig, and others

Emily is grateful to reunite with her Broadway Rose family to tell this classic story about how we live and how we treasure one another. Previous roles here include Miss Adelaide (Guys & Dolls), Jenny (Company), Domina (A Funny Thing Happened on the Way to the Forum), Mrs. Meers (Thoroughly Modern Millie), Doatsey May (The Best Little Whorehouse in Texas), Mrs. Tottendale (The Drowsy Chaperone), and Barbara (The Bikinis.) Other favorites include Connie (Jack Goes Boating), Sister Lidwina (Gracie and the Atom), and Bette (The Marriage of Bette and Boo) at Artists Repertory Theatre; Rose (Gypsy), Jack’s Mother (Into the Woods), and Doreen (Tartuffe) at Lakewood Theatre Company. Television credits: Trinkets, The Librarians, Grimm, Portlandia, and Leverage. 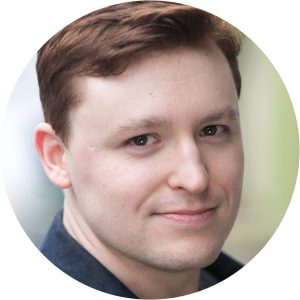 William Shindler as Marley, Ghost of Christmas Present, and others

William is honored to be stepping back on to the Broadway Rose stage. Past credits include Cowboy Bob in Footloose, Buzz in A 1940s Radio Christmas Carol, and Rusty Charlie in Guys and Dolls. 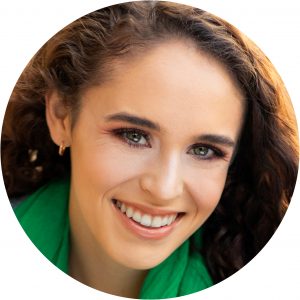 Valentina Silva as Emily and others

Valentina is so excited to spend the holiday season making her Broadway Rose debut in A Christmas Carol! After receiving her B.F.A. in musical theatre from Webster Conservatory of Theatre Arts, Valentina moved to Houston, Texas, where she plans to continue auditioning and working on her craft until the time is right to make the jump to New York City. Favorite roles include Sister Mary Robert in Sister Act, Linda in The Wedding Singer, and Olivia in Miss You Like Hell. 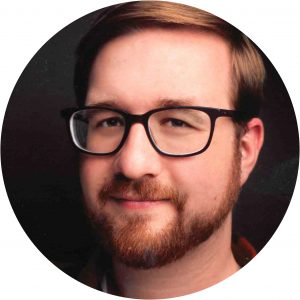 Tom Slater as Mr. Cratchit, Mr. Fezziwig, and others

Tomis happy to be back! After graduating from Western Oregon University in 2010, Tom appeared here in a number of shows including The Drowsy Chaperone, My Fair Lady, and The Music Man. He moved to New York City in 2014 and got the chance of a lifetime to play Franz Liebkind in the national tour of The Producers. Since returning to Oregon in 2018, Tom has performed in Stumptown Stages’ A Christmas Carol and in Broadway Rose and All Classical Portland’s co-production of Sherlock Holmes and the West End Horror. His voiceover work includes several advertisements and an appearance in the video game Red Dead Redemption 2. Tom and his wife, Jena, are going to be parents early next year and he couldn’t be more excited! 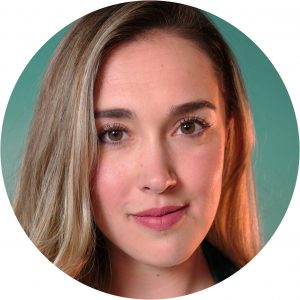 Victoria Spelman as Ghost of Christmas Past and others

Victoria is excited to be making her debut performance at Broadway Rose. A Las Vegas native, Victoria received her B.A. in stage and screen acting from the University of Nevada, Las Vegas. She has worked in cities such as Chicago, Los Angeles, San Diego, and Skagway, Alaska in both theatre and film. She recently studied at the Dell’arte School of Physical Theatre where she trained in clown, mime, and commedia dell’arte. She is an absolute goofball who loves teaching yoga, going on walks, and eating ice cream.

We welcome all audiences. Click here to learn more about our accessibility practices.