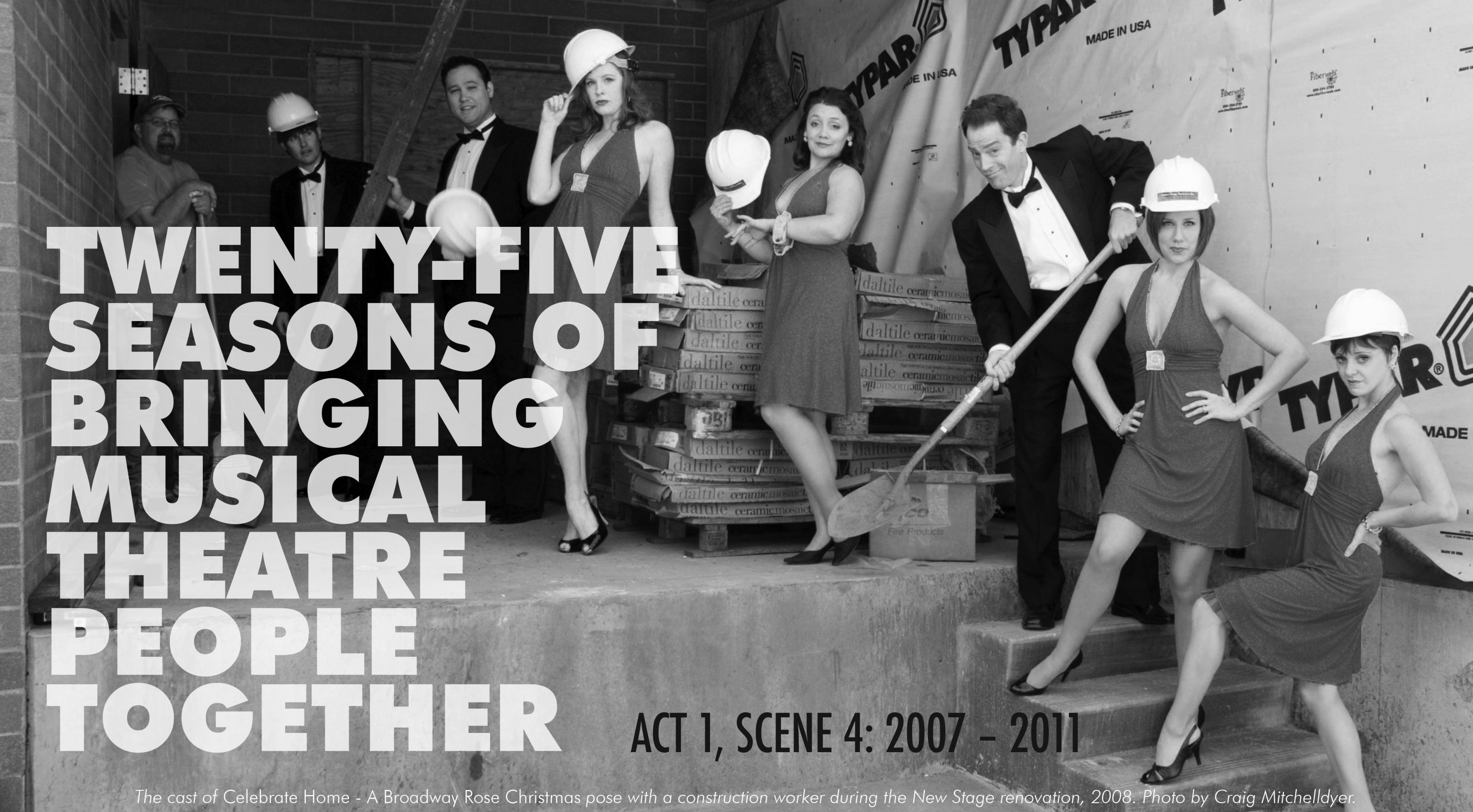 fter the Tigard-Tualatin School District’s board approved Broadway Rose’s proposal to renovate an abandoned cafeteria building at the Charles F. Tigard Elementary School and turn it into a theater, planning ramped up in 2007 for the renovation. The intention was to remain in the Deb Fennell Auditorium for summer shows and use the new theater for performances through the rest of the year and to serve as the company’s headquarters. Working with Soderstrom Architects on the design, Robert Gray Partners for construction, and Shiels|Obletz|Johnsen to manage the project, the company prepared to announce the plans for the new theater and fund raising campaign in the summer.

The newly formed Broadway Rose Theatre Guild (which supports the company with fundraising, marketing, and community-building) hosted a “Sweet 16” birthday party and sing-along fundraiser in February 2007 at the King City Club House that earned $5,700.

In February of 2008 a groundbreaking ceremony took place at the new location, and the company received a $124,000 grant from the Collins Foundation to help with the capital campaign. New staff positions continued to be added and Brisa Trinchero was promoted to Executive Director. Musical Theatre International selected Broadway Rose to be one of only 24 companies in the country to be given permission to produce Les Misérables. Broadway veteran Douglas Webster played Valjean and Robert Hunt, who played Javert on Broadway, directed. The production won the Drammy Award for Outstanding Production and set ticket sales records.

In May of 2008 a group of 40 Broadway Rose patrons and staff went to New York City to see Broadway shows and tour the city. The trip was a huge success and has continued every spring since. In December, Broadway Rose officially signed an agreement with the school district to become the tenant at the C. F. Tigard school location. Broadway Rose assumed the responsibility for funding the remodel and maintaining the building.

The capital campaign was successfully completed and in November 2008 the staff moved into the new management offices at the New Stage. The building inspector approved the final inspection just hours before the inaugural performance of Celebrate Home – A Broadway Rose Christmas.

In 2009, the company presented its first year-round season of six mainstage musicals, adding two more musicals to its annual lineup. Broadway Rose appeared on Oregon Business Magazine’s inaugural “100 Best Nonprofits to Work for in Oregon” list and was selected as the 2009 “Business of the Year” by the Tigard Chamber of Commerce. That summer the first Teen Workshop was held, and 40 teens performed a full production of Grease.

In 2010,  Portland Business Journal ranked Broadway Rose 10th on the list of “Top Arts Nonprofits,” behind Portland Center Stage and Artists Repertory Theatre. The company produced The King and I with a record-breaking 56 cast members. As the year came to a close, Brisa Trichero headed off to the Big Apple to pursue new dreams and Brenda MacRoberts was hired as the new Executive Director. The holiday show, G.I. Holiday Jukebox sold out before opening night and the Guild hosted its first annual Santa Sing-Along fundraiser. 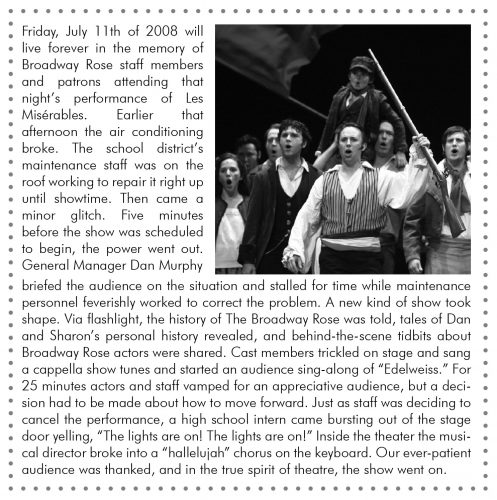 In 2011, the company launched its 20th anniversary season with Joseph and the Amazing Technicolor Dreamcoat as a nod to the production that started it all. The Guild hosted an anniversary luncheon and honored individuals, businesses, and foundations that had significantly supported the theatre. Broadway Rose received a $30,000 grant from the National Endowment for the Arts’ Access to Artistic Excellence program to produce Ripper, the company’s first-ever fully staged world premiere. The summer’s production of Hairspray again won the Drammy Award for Outstanding Production. Another major expansion for the company came with its investment in and implementation of new ticketing and database management software, Tessitura, which allowed patrons to see real-time availability and select their own seats when purchasing tickets online.

While the financial crisis of 2008 had for the most part not affected Broadway Rose, the challenging economy caught up to the theatre and took its toll on ticket sales and revenue in 2011. For the first time in eight years, the company did not reach its financial goals. Thanks to several generous donors, and a prudent reserve, the year ended stronger than expected and remained debt free, but it was clear that the company’s next chapter needed to focus on financially stabilizing the company.