The Pump Boys sell high octane on Highway 57 and the Dinettes, Prudie and Rhetta Cupp, run the Double Cupp diner next door. Together they perform a rousing, down-home mix of country western, rock ‘n’ roll, and blues in this charming tale of friendship, romance, and heartbreak. Packed with hummable, hilarious songs like “Be Good or Be Gone,” “Tips,” and “The Night Dolly Parton Was Almost Mine,” Pump Boys and Dinettes is a foot-stomping good time.

Pump Boys and Dinettes is presented by special arrangement with Samuel French, Inc.

Sharon Maroney (Prudie Cupp). Co-founder and Producing Artistic Director Sharon Maroney was last seen onstage at Broadway Rose in A Very Merry PDX-MAS. Sharon has enjoyed playing Angela in Honky Tonk Angels, Muriel in Dirty Rotten Scoundrels, and Louise in Always…Patsy Cline at Broadway Rose, and Dolly in Hello, Dolly! at both Broadway Rose and Lakewood Theatre Company. Her favorite past roles include Keely in Pete ‘n’ Keely and performing in Forbidden Broadway for triangle productions! Sharon is still married to Dan Murphy (founding general manager), that “curtain speech guy,” and is looking forward to directing The Sound of Music at Broadway Rose this summer.

Stephen Flakus (Jim) has been on stage or in the pit for numerous shows for over ten years. An Oregon native, he grew up in Florida and earned a degree in Classical guitar from the University of North Florida. He is happy to be back in Oregon. Currently Stephen teaches and gigs around the Portland area. Recent local theater credits include One Night with Janis Joplin at Portland Center Stage (cast, co-band leader), Return to the Forbidden Planet staged reading at Broadway Rose, and Heart Beatings at Coho Theater. www.stephenflakus.com

Andrew Maldarelli (Jackson) is thrilled to join Broadway Rose Theatre Company. Pump Boys & Dinettes marks his first theatrical appearance since his relocation from San Francisco ten years ago. His performance credits include, Forever Plaid (Sparky), The Most Happy Fella (Herman), The Apple Tree (Adam), A Little Night Music (Leibesleider), Phantom of the Country Opera (The Phantom), and City of Angels (Angel City 5). Mr. Maldarelli spends his days as a public elementary school teacher, and his nights with two darling daughters, his lovely wife, and Stella the Bulldog.

Barney Stein (L.M./Music Director) has been a music director, pit player and accompanist around Portland since 2004, after a lengthy stint in New York. Previously for Broadway Rose, he was music director for The Gifts of the Magi and Christmas of Swing, and played piano/synthesizer on Jekyll & Hyde, Dames at Sea and Always…Patsy Cline. On stage, for Broadway Rose, he danced in Chicago and 42nd Street, and played Irving Berlin in The Melody Lingers On: the Songs of Irving Berlin. Other stage credits include Claude in Hair (NY), Jesus in Jesus Christ Superstar (LA), and Darling (the dancing horse) in Strider (SF). Barney was a professional dancer and dance accompanist in California and NY prior to coming to Portland and holds an M.A. in Dance from Stanford University. 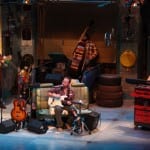 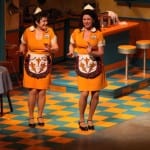 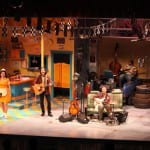 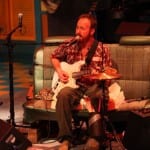 Theater review: ‘Pump Boys and Dinettes’ rocks like a front-porch recliner
By Carol Wells
The Oregonian, Feb. 4, 2012
…The easy, lighthearted music performed by a cast of practiced musicians and singers keeps us humming along, and Chan Harris’ self-effacing direction gives his performers the space to shine…Read the rest here.