Combining classic carols, holiday pop songs, and original offbeat material created especially for Portland audiences, A Very Merry PDX-MAS lovingly pokes fun at our “ever green” city with the perfect mix of local humor and holiday heart. A Very Merry PDX-MAS is a charming exploration of seasonal traditions and how the holidays continue to enchant us, inspire us, and drive us to the brink of insanity. Songs include: “PDX-MAS,” “Carol of the Fans,” “Joy to the ‘Burbs,” and “The Re-Gifter’s Lament,” plus many of your favorite holiday classics. If this doesn’t warm the frost on your toes, nothing will!

During the run of A Very Merry PDX-MAS, Broadway Rose is partnering with Portland Rescue Mission to collect needed items for our neighbors struggling with homelessness. Click here to find out how you can help!

Audio description will be available for the December 17, 2:00 p.m. performance.

Show Sponsor
Bank of the West

Amy Beth Frankel is so excited to spend another Christmas with her Broadway Rose family! She was last seen at the Broadway Rose choreographing Fiddler On The Roof for the teen musical theater workshop this past summer. Other Broadway Rose choreography credits include A Chorus Line, The King And I and Big River. Amy has performed at Broadway Rose in numerous musicals including Singin’ In The Rain, Dirty Rotten Scoundrels (Drammy Award for Outstanding Performance) and 42nd Street (Drammy Award for Outstanding Performance). Other local theatre credits include “Charity” in Sweet Charity at Lakewood Theatre Center, West Side Story, Cabaret, and Guys and Dolls at Portland Center Stage, and The Pain and the Itch and The Lying Kind for Third Rail Repertory, where Amy is a core company member.

Isaac Lamb was last seen at Broadway Rose in Ripper and Forbidden Broadway. Isaac is a native Portlander, a graduate of Loyola Marymount University, and a proud Company Member of Third Rail Repertory Theatre. For several years Isaac starred in the national tour of Defending the Caveman, Broadway’s longest running one-person show. Locally, Isaac has performed with Third Rail in The Lying Kind, Kiss Me Like You Mean It and The Wonderful World of Dissocia, Portland Center Stage in The 25th Annual Putnam County Spelling Bee, Artists Repertory Theatre in Assassins and Vitriol & Violets (2009 Fertile Ground), Lakewood Theatre Company in Into the Woods and Lend Me a Tenor, and Northwest Children’s Theatre in Beauty and the Beast (Drammy Award, Best Supporting Actor). Isaac also directs theater and film in Portland and teaches theater skills for high school and middle school students, including Broadway Rose’s Teen Summer Workshop.

Eric Little is a Portland area native who last appeared on Broadway Rose’s stage as the title character in Rumpelstiltskin. Eric also starred as Joseph in Broadway Rose’s recent production of Joseph and the Amazing Technicolor Dreamcoat. Other local theater credits include How I Became a Pirate and Alice & Wonderland: A Rock Opera (Tweedle Dee) at Oregon Children’s Theatre. Eric is also an accomplished musician; he played keyboard in the orchestras for Oklahoma! at Portland Center Stage and Hairspray at Broadway Rose, and music directed the teen workshop production of Fiddler On The Roof for Broadway Rose. He is a graduate of St. Olaf College in Northfield, Minnesota with a degree in Music, where he studied piano and voice and sang with the St. Olaf Choir. Favorite theater credits there were Sir Andrew in Twelfth Night and Bobby Strong in Urinetown.

Sharon Maroney is the co-founder and producing artistic director for Broadway Rose. Sharon was last seen onstage at Broadway Rose as Angela in Honky Tonk Angels. Sharon enjoyed playing Muriel in Dirty Rotten Scoundrels and Louise in Always…Patsy Cline at Broadway Rose, and Dolly in Hello, Dolly! at both Broadway Rose and Lakewood Theatre Company. Her favorite roles include Keely in Pete ‘n’ Keely and performing in Forbidden Broadway for triangle productions! Sharon is still married to Dan Murphy (founding general manager), that “curtain speech guy,” and is looking forward to performing with Dan and Rick Lewis on January 14th at Broadway Rose in a wacky cabaret roasting their marriage.

Anne McKee Reed is PDXcited to return to Broadway Rose, having previously performed in Celebrate Home and The Melody Lingers On. Ms. Reed was most recently seen as The Bat and The Owl in L’enfant et les Sortileges with Portland Opera and Yum-Yum in Mikado (Mock’s Crest). Other recent performances include Satirino in La Calisto, First Spirit in The Magic Flute and Jennie Hildebrand in Street Scene (Portland Opera), Rose Maybud in Ruddigore, Josephine in H.M.S. Pinafore, Ann Page in The Merry Wives of Windsor (Mock’s Crest), Susanna in Le Nozze di Figaro (Opera Plus! Coeur d’Alene), Yuletide Spectacular (Oregon Symphony), Nanetta in Falstaff (Astoria Music Festival), and Valencienne in The Merry Widow (Obsidian Opera). Ms. Reed divides her time between serving on the voice faculty of Pacific University, teaching a thriving private voice studio and being a Mommy to Blake and Evelyn. She will join Portland Opera in April 2012 in their new production of Philip Glass’ Galileo Galilei.

Sara Catherine Wheatley feels so grateful to be back onstage at the Broadway Rose and with a cast full of ringers to boot! You might recognize Sara Catherine from this summer’s production of Hairspray, where she played the delightfully evil Velma VonTussle. Other recent Portland credits include Annie Get Your Gun (Annie Oakley) and The Producers (Ulla) at Lakewood; The 25th Annual Putnam County Spelling Bee (Olive Ostrovsky), One Flew Over the Cukcoo’s Nest (Candy Starr), and Ragtime: The Musical (Ensemble/ Mother Understudy) all at Portland Center Stage; Beauty and the Beast (Babette) with Pixiedust Productions; Alice & Wonderland: A Rock Opera (Rock Alice) and Giggle Giggle Quack (Cow) at Oregon Childrens’ Theatre; and here at the Broadway Rose in Nite Club Confidential (Dorothy Flynn) and Always…Patsy Cline (Patsy). A proud Alabama native, Sara Catherine holds a Bachelor’s Degree in Theatre from The University of Alabama (Roll Tide!!). In her time away from the theater, Sara Catherine is dabbling in the world of writing and recording original music as well as lending her talent as front woman for the ultimate ’80s cover band, DeeDee Foxx and the Stimulus Package. Check her out at www.deedeefoxx.com! 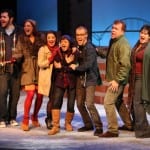 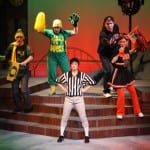 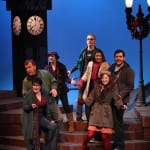 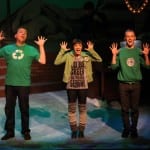 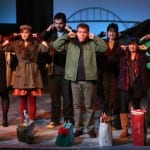 A Very Merry PDX-MAS (review)
By Ben Waterhouse
Willamette Week, Nov. 28, 2011
It’s a fine thing…a refreshing antidote to the tired camp that fills most of America’s stages each December. It was funny, sincere and exceptionally well performed…Read the rest here.

Broadway Rose’s ‘A Very Merry PDX-Mas’ offers fresh, local spin on holiday season (review)
By Grant Butler
The Oregonian, Nov. 26, 2011
Coming up with a new holiday revue is tricky business. To honor the spirit of the Christmas season, the show needs to offer plenty of traditional songs and themes, while mixing in enough fresh ideas and unfamiliar tunes to keep it from become just another holiday hit parade…Broadway Rose Theatre Company strikes that balance perfectly with A Very Merry PDX-MAS…The cast is one of the strongest Broadway Rose has ever assembled, featuring seven terrific singers, who each get at least one solo number to showcase their vocal and dancing skills...Read the rest here.

Holiday Events Guide: Performance picks worth planning for
By Marty Hughley
The Oregonian, Nov. 4, 2011
Toss classic carols and holiday pop favorites with some lovingly rib-jabbing local humor, and you might have a pleasant seasonal revue. Have it delivered at Broadway Rose Theatre Company by such charmingly skillful performers as Isaac Lamb, Amy Beth Frankel and Sara Catherine Wheatley, and you should have a touch of Christmas magic…Read the rest here.

Warning: The creator of PDX-MAS is not a Portland native
By Barbara Sherman
The Times, Nov. 3, 2011
Abe Reybold, a one-man band who has worked for the Broadway Rose Theatre Company doing musical staging, directing, arranging lyrics, singing, dancing and acting as well as writing lyrics, is back with a holiday show…Read the rest here.