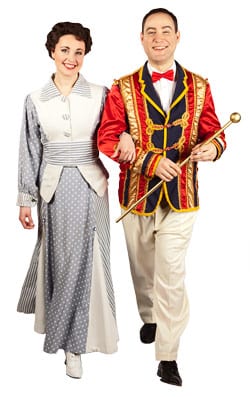 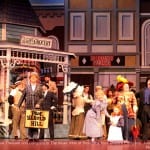 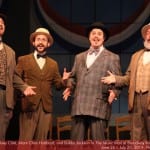 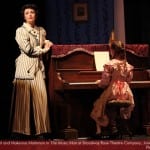 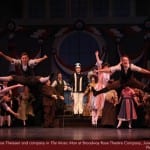 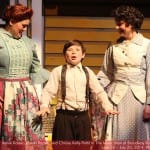 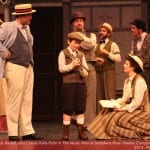 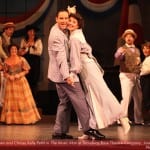 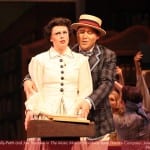 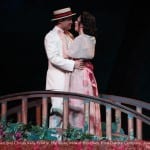 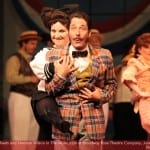 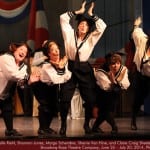 Broadway Rose Presents The Music Man (Review)
By Dennis Nyback
Portland Stage Reviews, Jul. 11, 2014
Although there is a lot more going on, this is very much the story of Professor Harold Hill and the Librarian Marion Paroo. Here they are capably essayed by Joe Theissen and Chrissy Kelly-Pettit. Mr. Theissen is very good and appropriately insouciant in the showy part of the con man Harold. He moves well on the stage and his voice is fine for the part. Ms. Kelly-Pettit is very good as the late to awakening in love Marion. She has a nice voice with a warm quality that is well up to the challenges in the score...Read more.

Broadway Rose’s “Music Man” celebrates salesmanship, stubborn little towns and the art of redemption (Review)
By Holly Johnson
Oregon Music News, Jul. 7, 2014
Broadway Rose’s Music Man is a crystal clear production, and although Theissen sparkles as the wylie Hill and Chrissy Kelly-Pettit is sweet and comely as his love interest Marian the Librarian, it’s the chorus and secondary characters who really shine. Director/choreographer Peggy Taphorn knows the abilities and limitations of young dancers,and manages to bring out the best in this group…Read more.

The Music Man (Review)
by Tree Palmedo
Willamette Week, Jul. 2, 2014
The cast boasts lots of vocal talent, making the ensemble songs pop and offering several smaller moments that captivate. Chrissy Kelly-Pettit, as Marian the librarian, has a pretty soprano with just enough vibrato to turn slower numbers like “Goodnight My Someone” into standout songs…Read more.

Reviews: ‘Music Man,’ ‘Philadelphia Story’
By Bob Hicks
Oregon ArtsWatch, Jun. 30, 2014
The job of any fresh production is to get you to hop onboard and get excited about taking a familiar journey all over again. Broadway Rose succeeds at that, providing lush sets and costumes (both from Fullerton Civic Light Opera in California), a lot of laughter, a dash of sentiment, and plenty of sharply turned supporting performances…Read more.

Broadway Rose Brings 76 Trombones and a Lot of Exuberance to THE MUSIC MAN (Review)
By Patrick Brassell
BroadwayWorld, Jun. 30, 2014
…the whole show is magic. Willson sneaks songs into the story in unusual ways, and the show never stops dancing, even when the actors are standing still. Broadway Rose always does fine work, but here they’ve truly outdone themselves…Read more.

Music Man at Broadway Rose (Review)
By Tina Arth and Darrell Baker
Westside Theatre Reviews, Jun. 30, 2014
From the moment the curtain opens on the hypnotic light of a massive train engine until the last chaotic, dissonant notes of the River City Boys Band, the audience is transported to a vital, living, 1912 vision of small-town Americana…Director/choreographer Peggy Taphorn not only brings it back to life, she gives it new life, assisted by her amazing 40-person cast and music director Alan D. Lytle’s stunning orchestra…Read more.

The Music Man – A Trip Down Memory Lane (Review)
By Dennis Sparks
Dennis Sparks Reviews, Jun. 30, 2014
The singing and dancing by the entire cast was spot on. Taphorn has done an amazing job of both the direction and choreography of this production. It must have been a grueling schedule for all, but with Taphorn at the helm, everything comes across flawlessly…Read more.

The Music Man at Broadway Rose (Review)
By Kristopher Haines
The Crippled Critic, Jun. 30, 2014
The large cast is impressive in every way, but especially with regard to choreography. The band is top-notch and fills the intimate space with so much melody it seems barely able to contain it…Read more.

Big, loud ‘teddy bear’ takes to Tigard stage
By David Roza
News Times, Jun. 25, 2014
It’s been said that a director paints his scene with the colors of his characters. But when it comes to Charlie Cowell, the anvil salesman in this year’s Broadway Rose Theatre Company production of “The Music Man,” no one can quite agree what color he is…Read more.

Chrissy Kelly-Pettit is perfect to play Marian the librarian in ‘The Music Man’
By Barbara Sherman
Regal Courier, Jun. 24, 2014
When Kelly-Pettit learned late last summer that Broadway Rose would be producing “The Music Man,” she set her sights on the role of Marian. “I had to wait a long time to audition, and I only wanted this role,” she said, adding, “Broadway Rose is like a family, and I’m so happy to be working here again”…Read more.