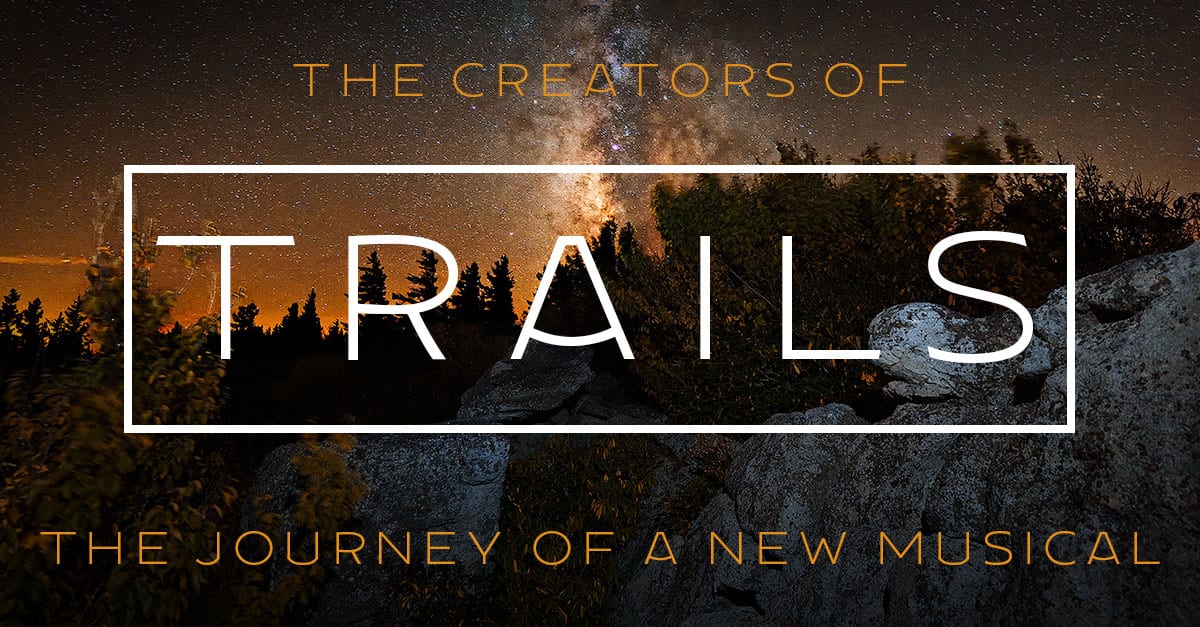 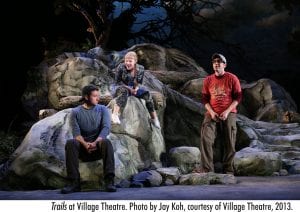 Trails began with a phone call.

Jeff had reconnected with a friend from elementary school, and during their conversation, they were comparing notes on where they were in their lives, what they had accomplished, and what they hadn’t accomplished. The friend said, “We should hike the Appalachian Trail.”

The hike never happened, but the idea stuck in Jeff’s mind, and he called Jordan, with whom he’d been collaborating for a number of years. Jordan’s initial response was, “Are you out of your mind? How do we write a show about walking for six months?”

But the idea started to stick and Jeff and Jordan started writing songs for a show about two friends who hadn’t spoken in years who decided to hike the Appalachian Trail together. In fact, the first song they wrote was “Stories in the Sky” and throughout every iteration of the show, it became the touchstone of the piece. 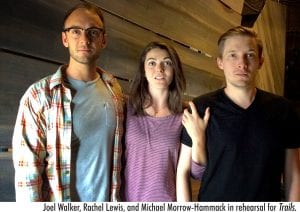 At the time, they received an offer to do a workshop at Millikin University in Central Illinois. They decided to take the still unfinished show there and took advantage of the talented faculty and students to write and develop the show. They walked away with a number of songs, but also with the realization that they needed a much better book. Jeff and Jordan had spoken with friends and other writers. While Jeff and Jordan didn’t know fully what their show was meant to be, they knew what it wasn’t. It was at that point that they were introduced to Christy Hall.

Christy had never written a musical before, but she was an experienced playwright and screenwriter. She reviewed the materials that Jeff and Jordan had created and proposed a series of changes that she would make if she were writing the book. As soon as Jeff and Jordan heard what Christy proposed, they knew they found the person who understood the story they wanted to tell and a creative team was born.

For almost eight years, the show has benefitted from workshops and developmental productions at theatres in Los Angeles, New York, and Seattle. It has been influenced and improved by collaboration with wonderful actors, directors, musical directors, producers and audiences across the country. In short, Trails has been on a long and complicated journey, much like that of our two protagonists. Now, we are excited for you to experience it here at the Broadway Rose as our musical continues on its way toward journey’s end.

We thank you all for joining us on the trail.