If you had tickets for the December 14 or 15 performances that were canceled due to inclement weather, please call the box office at 503.620.5262 to discuss your options.

Take a sleigh ride through everything that makes Portland, well, Portland. An audience favorite created exclusively for Broadway Rose, A Very Merry PDX-mas celebrates (and pokes loving fun at) all the quirks of our “ever green” city with beloved holiday pop songs, classic carols, and original offbeat material. Featured songs include “Carol of the Fans,” “Green Christmas,” and “The Re-Gifter’s Lament.”

Performance run time is approximately 2 hours including one 15 minute intermission.

During the run of A Very Merry PDX-mas, Broadway Rose is partnering with Good Neighbor Center to collect essential items for local families overcoming homelessness. Visit the “Giving Drive” tab to find out how you can help!

Collin Carver is a cosmetologist at Studio V in Felida, WA; teacher, and violinist as well as a performer. Collin is excited to continue his time at Broadway Rose in this production! Notable roles include Eugene/Teen Angel in Grease (Broadway Rose, Portland Area Musical Theatre Award for Best Supporting Actor nominee), Elder Shumway in The Book of Merman (triangle productions!), The Fire in Ablaze!, an original a cappella musical thriller (Staged!, four Drammy Awards including Outstanding Ensemble and Best Original Musical), Rolf in The Sound of Music (Broadway Rose), Alfred Bell in the original and revival cast of WWII Radio Christmas (Oregon Children’s Theatre), and Barnaby in Sail Away (Lakewood Theatre Company). He hopes his talent, work ethic, character, faith, and love for the arts and entertainment will make him a household name. Facebook.com/HairGravitation

Sarah DeGrave happily returns to Broadway Rose after lending her voice to the chorus of nuns in The Sound of Music. Since graduating from Central Washington University with a degree in theatre performance, she has been seen onstage at Seattle Musical Theatre, triangle productions!, Stumptown Stages, Milagro Theatre, and most recently as the wacky plant lady in Heidi Duckler Dance Theatre/Northwest’s production of Tabletop. Other recent roles include Kira in Stagework Inc’s Xana-redu. Offstage, Sarah dabbles in photography, songwriting, and other artistic pursuits. You can find out more about her current projects at sarahdegrave.com.

Cassi Q Kohl is happy to be back at Broadway Rose after almost a decade away! After graduating from the University of Washington (vocal performance), Cassi moved east, where she originated a role in the Off-Broadway production of Soul Doctor (New York Theater Workshop) and joined the original cast of Motherhood the Musical in Philadelphia (GFour Productions). She enjoyed traveling as a Mainstage performer with Disney Cruise Line and also performed in the national tour of Martha Speaks (Theaterworks USA). Favorite regional credits include: Ilona in She Loves Me (Lakewood Theatre Company, 2015 Drammy Award), Josephine in H.M.S. Pinafore (Mock’s Crest, 2016 Drammy Award), Piggie in Elephant & Piggie’s We Are In A Play (Seattle Children’s Theater), Scarecrow in The Wizard of Oz (Enlightened Theatrics, Salem), and Carrie in Carousel (Clackamas Repertory Theater). www.CassiQ.com

Dru Rutledge just loves spending the holiday season at Broadway Rose; you might remember her from last year’s production of A Taffeta Christmas and also Oklahoma! (Laurey). A proud Kansan by birth, Dru is so happy to now call the beautiful Northwest her home. Since graduating with her master’s degree in opera performance, Dru has also performed locally with Portland Opera, Portland Center Stage, Lakewood Theatre Company (2015 Drammy Award for Best Actress in a Musical for Amalia in She Loves Me), Clackamas Repertory Theatre, Mock’s Crest, BodyVox, The Oregon Symphony, and the Portland Gay Men’s Chorus. Dru wants to thank Dan, Sharon, Abe, Jeffrey, Angela (her Gentle Giant), and this entire wacky, talented cast! And to her MamaBear, this one is for you! To see what Dru’s up to next visit drurutledge.com

Benjamin Tissell was most recently seen in Fly By Night here at Broadway Rose and in Peter and the Starcatcher at Portland Playhouse. He has also worked extensively for Lakewood Theatre, Valley Repertory Theatre, Northwest Children’s Theatre, Portland Actor’s Ensemble, and others. Ben is a resident teaching artist at Clackamas High School and an accomplished singer-songwriter. Recordings, videos, media and a full list of upcoming performances can be found at BenjaminTissell.com. Ben is also very involved at his church where he serves the youth community.

Danielle Valentine. This is Danielle’s debut with Broadway Rose and she is excited to be part of such an amazing creative team. Danielle has enjoyed working with various theater companies around town including Lakewood, Oregon Children’s Theatre, Stumptown Stages, Hillsboro Actors Rep and others. When not acting, Danielle enjoys teaching preschool and musical theater to young artists. Love to Jared, Elijah and Aida.

If you had tickets for the December 14 or 15 performances that were canceled due to inclement weather, please call the box office at 503.620.5262 to discuss your options. 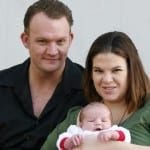 A Very Merry PDX-mas celebrates the joy of the holidays in our hometown. Broadway Rose Theatre Company is honored to partner with Good Neighbor Center to help local families struggling with homelessness, so that they might also experience the warmth of the season while receiving safe emergency housing and supportive, empowering services.

To help our neighbors in need, simply bring your unwrapped gift of any of the following items to any performance of A Very Merry PDX-mas or to the box office during business hours. There will be collection bins in the lobby. Thank you!

“The items listed above are not sexy, but are vital to the care and feeding of nine families,” says GNC Executive Director Jack Schwab. “Thank you for helping us in this special way.” 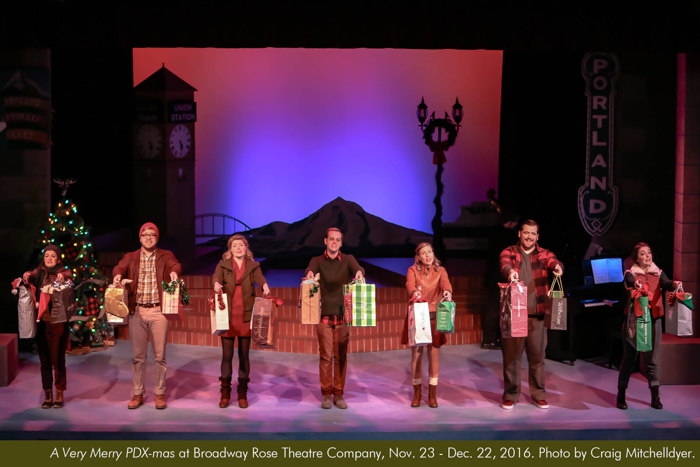 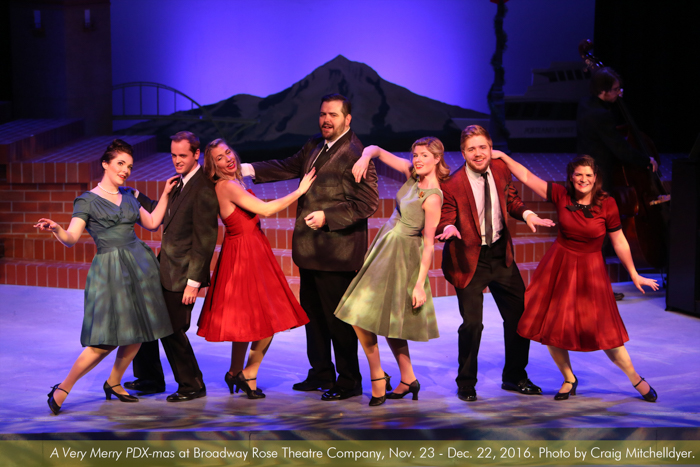 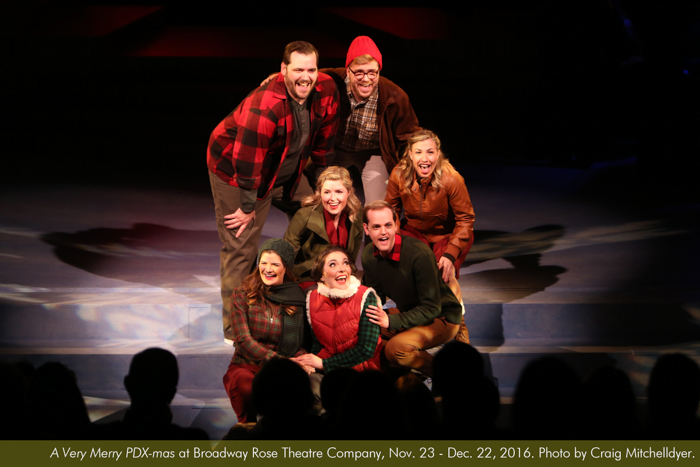 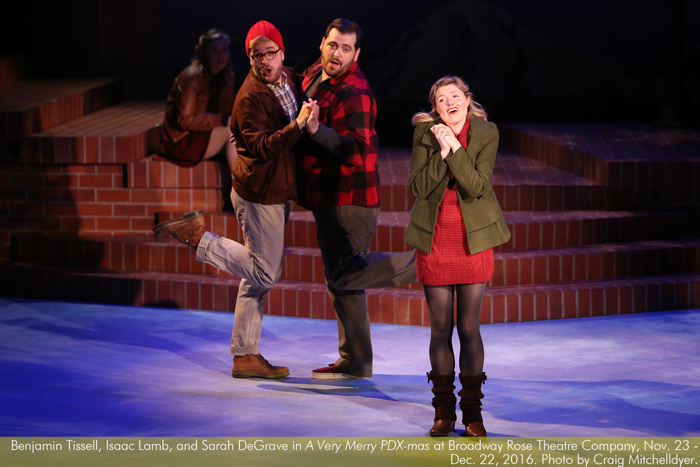 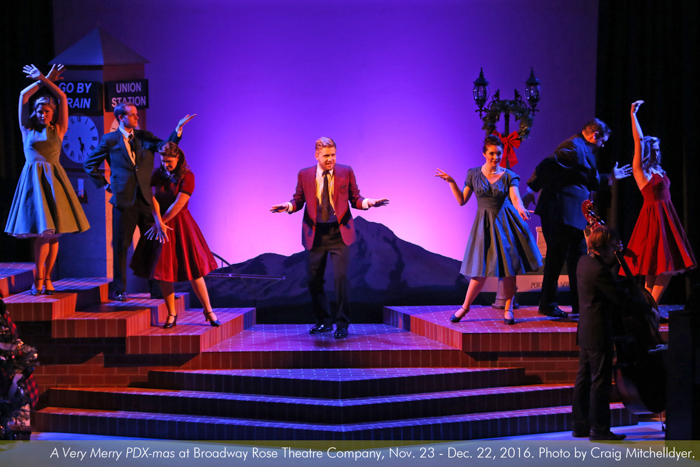 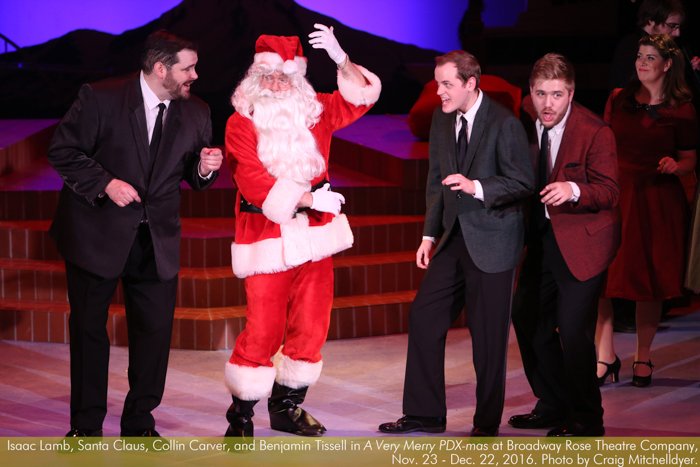 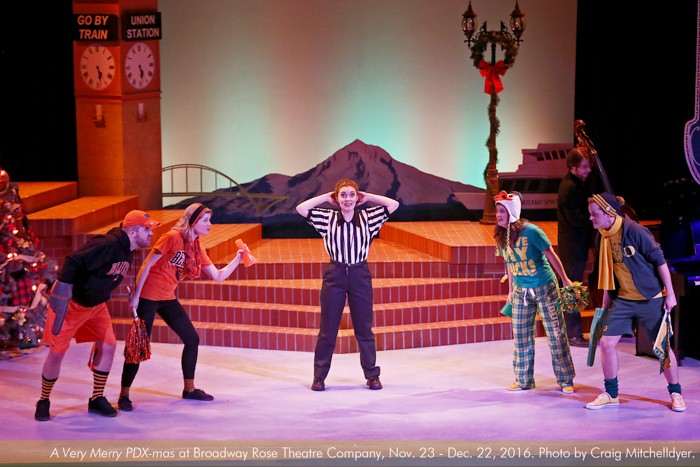 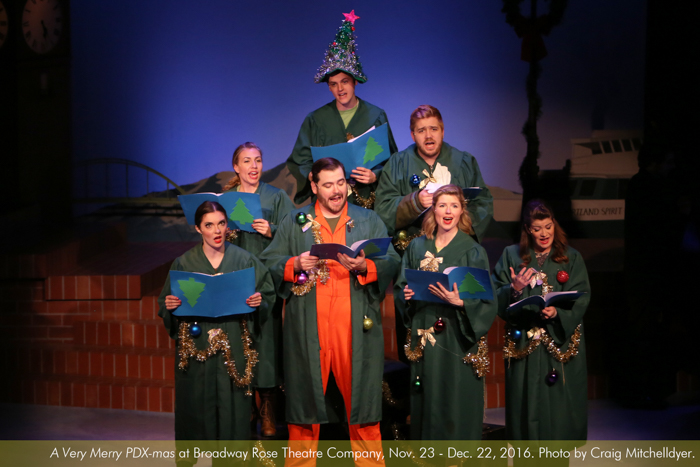 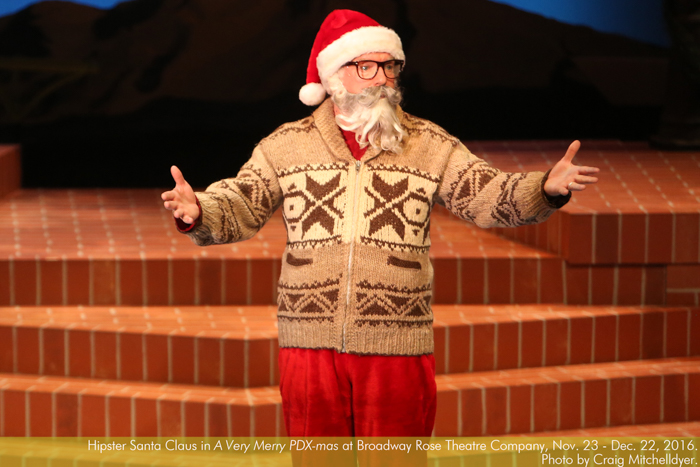 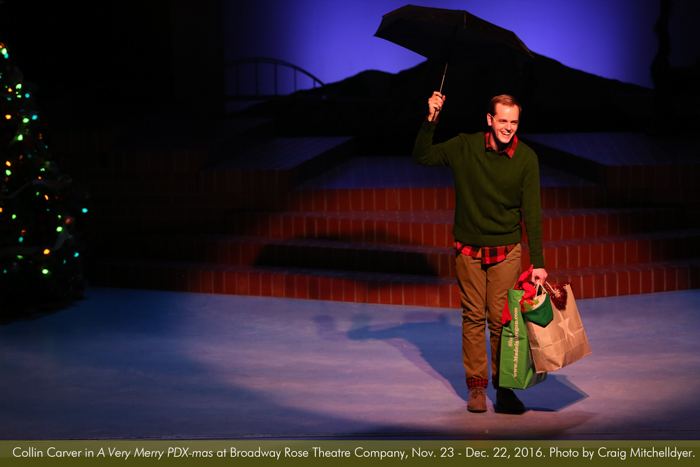 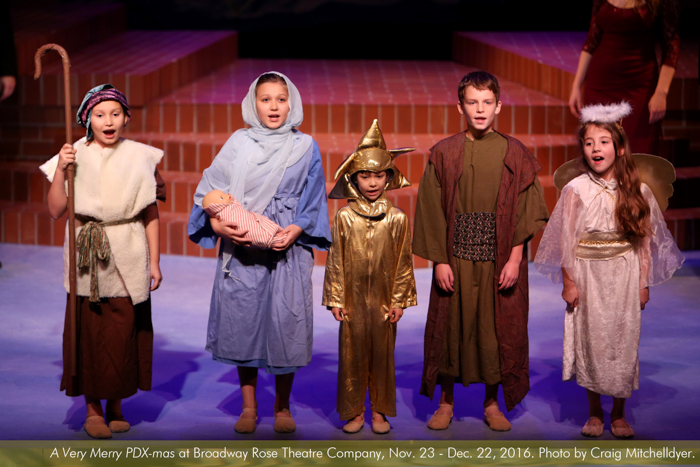 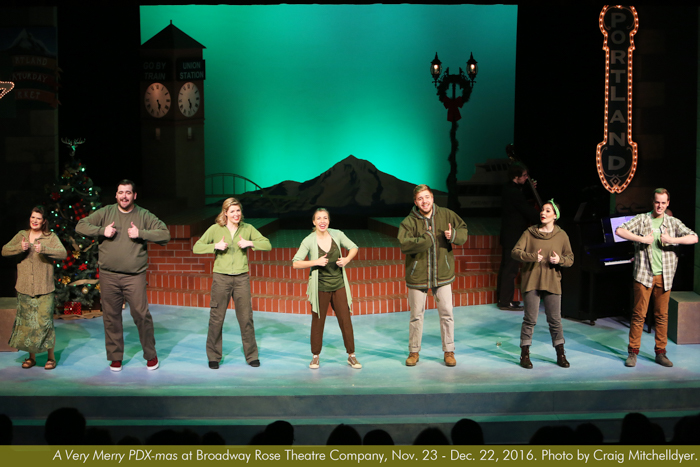 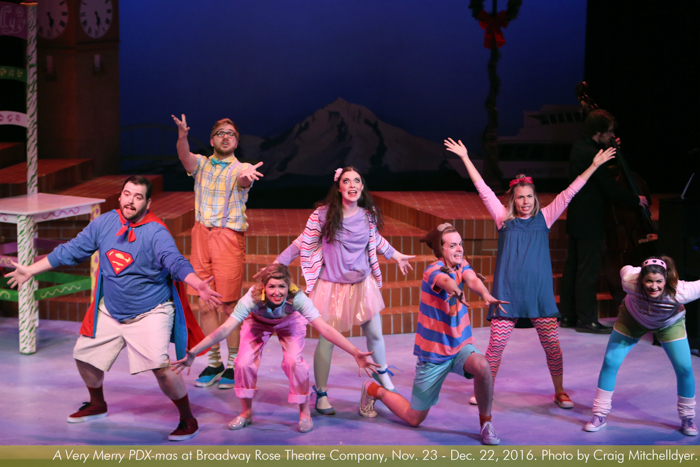 Oy! Jesus! A PDX-mas by Judy Nedry, Nov. 30, 2016 It’s difficult to have a favorite moment in this show. The songs are witty and fun…This show is two hours of great singing, surprises, and a lot of laughs...Read more.

“A Very Merry PDX-mas” @ Broadway Rose by Kristopher Haines The Crippled Critic, Nov. 30, 2016 …”PDX-mas” does fill an unexpected void,  there is no other unabashed tribute to yuletide fun…Read more.

Yes, Virginia, there IS a good holiday musical by Christa Morletti McIntyre Oregon ArtsWatch, Nov. 28, 2016 A Very Merry PDX-Mas is a charming package of all the funky and endearing points of culture that make our city. For two hours you’ll get lost and be reminded that there’s no place like home for the holidays.…Read more.

A Very Merry PDX-mas from Broadway Rose by Tina Arth Westside Theatre Reviews, Nov. 28, 2016 The show provides exactly the kind of experience its audiences expect for the holidays – impeccable vocals, a liberal dose of humor, some fine dancing, and a measured dose of scene-stealing kiddos to charm even the surliest Scrooge…Read more.

Actor goes from sandwich-maker to Christmas caroler by Barbara Sherman Regal Courier, Nov. 22, 2016 One of the actors in the upcoming Broadway Rose production of “A Very Merry PDX-mas” may look very familiar to audiences for good reason…Read more.