Combining classic carols, holiday pop songs, and original offbeat material created especially for Broadway Rose audiences, this holiday revue reminds us of everything that we love about our “ever green” city. It’s “a charming package of all the funky and endearing points of culture that make our city. For two hours you’ll get lost and be reminded that there’s no place like home for the holidays.” (Oregon ArtsWatch)

This holiday revue is suitable for most audiences. Click here for our pre-viewing guide for sensory-sensitive and content-sensitive patrons (PDF). 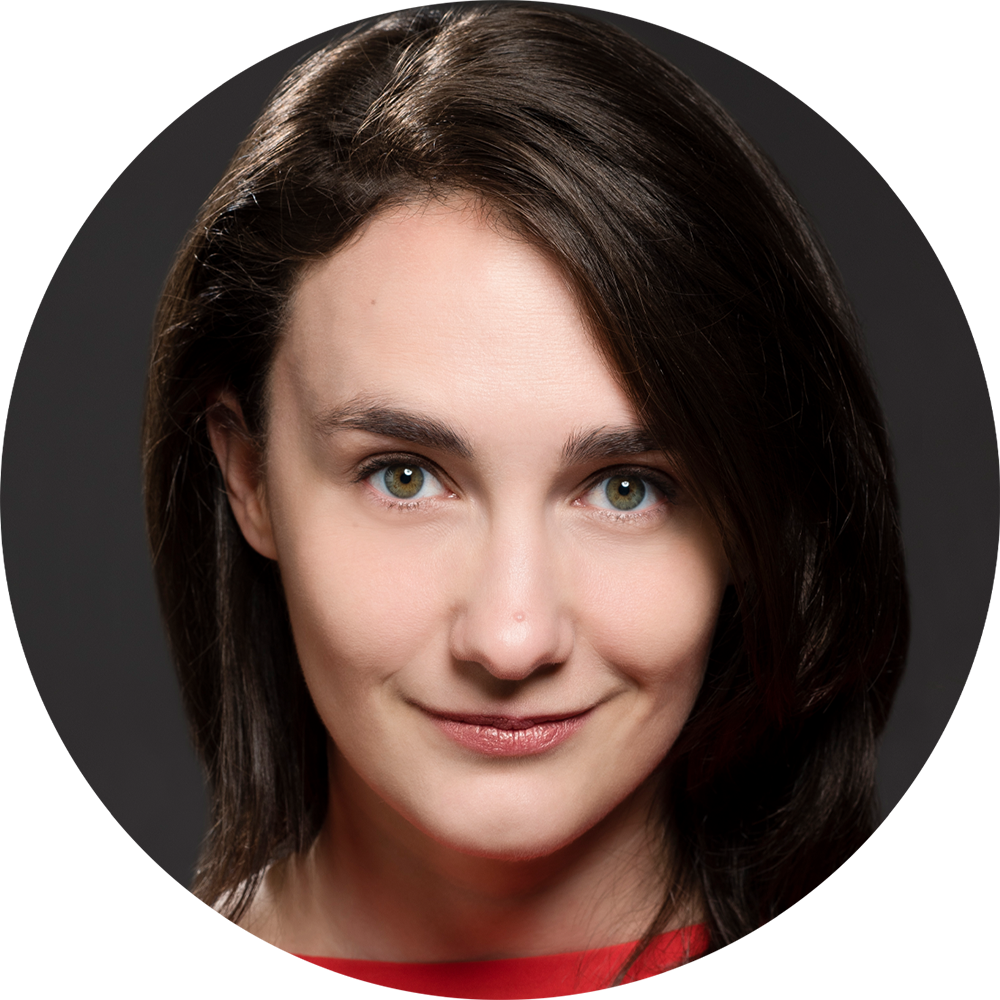 Cara is honored to be performing with Broadway Rose for the first time. She last appeared on the stage as Wilbur Turnblad in Hairspray and Giles Corey and Mercy Lewis in The Crucible. Cara is a proud theater educator with training from Swarthmore College and NYU Steinhardt. Her directing credits include The Little Mermaid Jr. and James and the Giant Peach, along with multiple one acts at Fowler Middle School. In addition to her students for inspiring her, she would like to thank her family for their unconditional love and support. 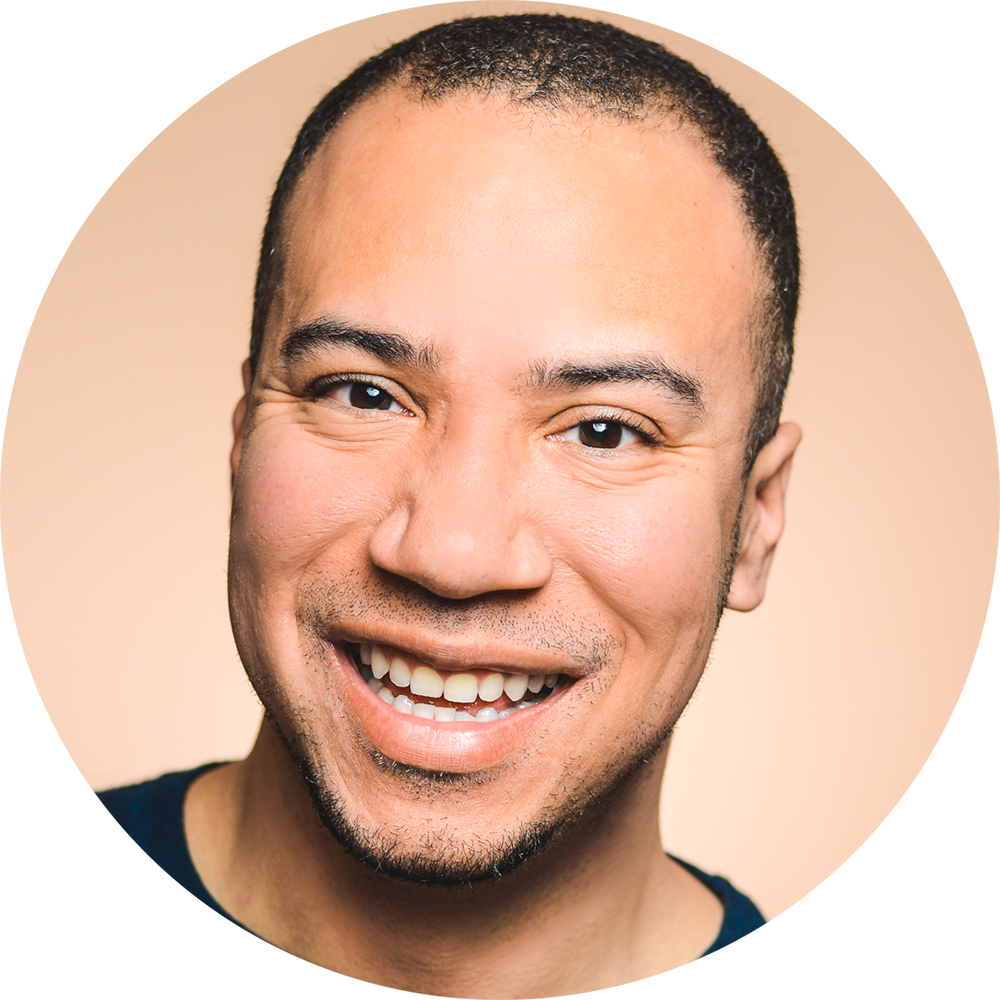 Michael (he/him) is thrilled to be back at Broadway Rose for the third time this season, recently starring as Linus in You’re a Good Man, Charlie Brown and performing in this year’s gala, Live and In Living Color. New York credits include: Babes in Toyland (Lincoln Center), Jesus Christ Superstar (The Westchester Theatre), and benefit concerts of Pippin and The Secret Garden on Broadway. TV/Film: Ed (NBC), Showing Up (A24 Films), and Outdoor School. Michael grew up in Beaverton, works at Oregon Children’s Theatre, sings with Portland Gay Men’s Chorus, and is an accomplished cabaret artist. He is a board member of Theatre for Young Audiences/USA and Bridging Voices. BFA in Musical Theatre: Boston Conservatory. Visit MichaelHammerstrom.com.

William is thrilled to be back at Broadway Rose for the holidays. Past Broadway Rose credits include Cowboy Bob in Footloose, Buzz in A 1940s Radio Christmas Carol, Rusty Charlie in Guys and Dolls, Vinnie DiRuzzio in Lucky Stiff, and ensemble in last year’s production of A Christmas Carol, the Musical. Other Portland area credits include Charles Thompson in 1776 and Muleteer in Man of La Mancha (Lakewood Theatre Company), Miner/Pit Supervisor in Billy Elliot (Pixie Dust Productions), and Elder Braithwaite in The Book of Merman (triangle productions!). 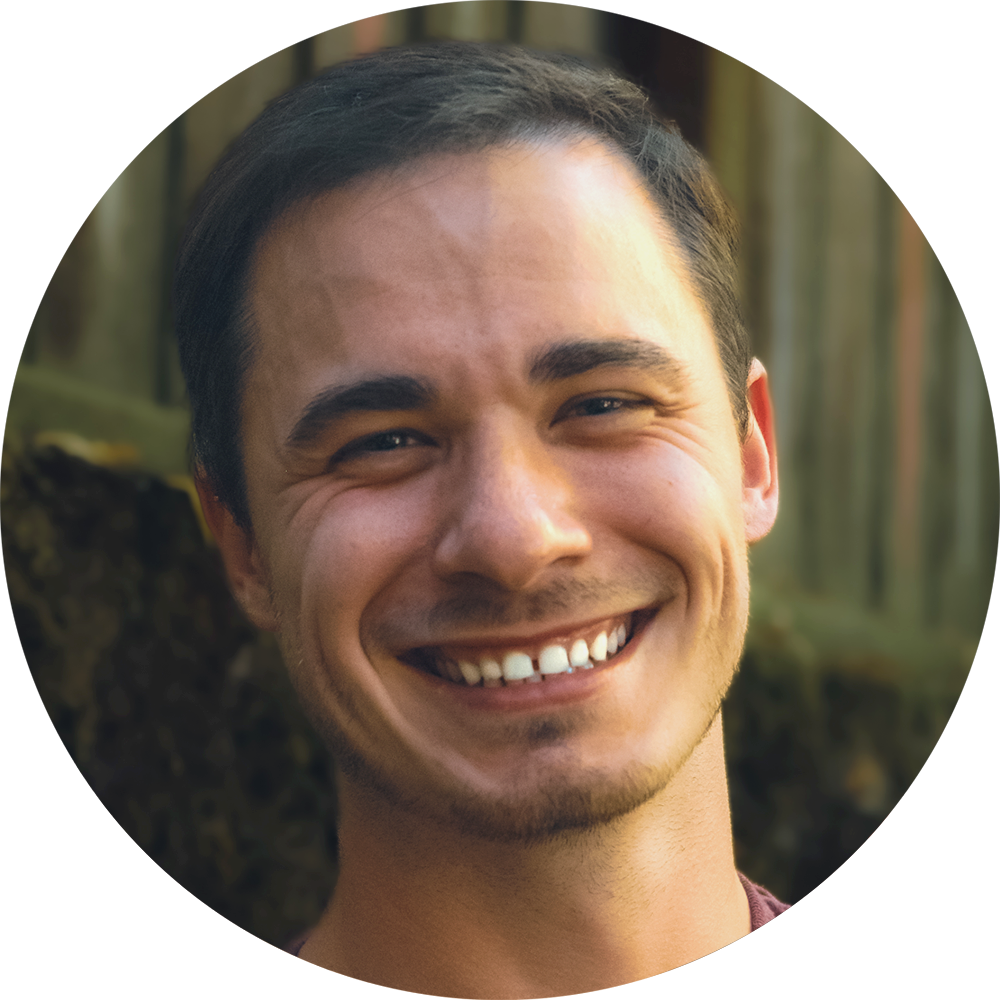 Richie made his Broadway Rose debut in our most recent show, The Evolution of Mann, and is stoked to be back performing in PDX-mas! Richie received his BFA from Cornish College of the Arts and has spent the last eight years performing bicoastally. His most recent Portland acting credits include: Blood Brothers with triangle productions! and Great Gatsby’s Daisy with Experience Theatre Project. Richie was a co-creator of Storybook Theatre of Cottage Grove’s Summer Musical Theatre Intensive and has taught various young artist development programs. Additional regional experience: Newsies with the Village Theatre, The Lion, the Witch and the Wardrobe with Seattle Children’s Theatre, and Happy Ending with The Foundry of Fort Lauderdale. 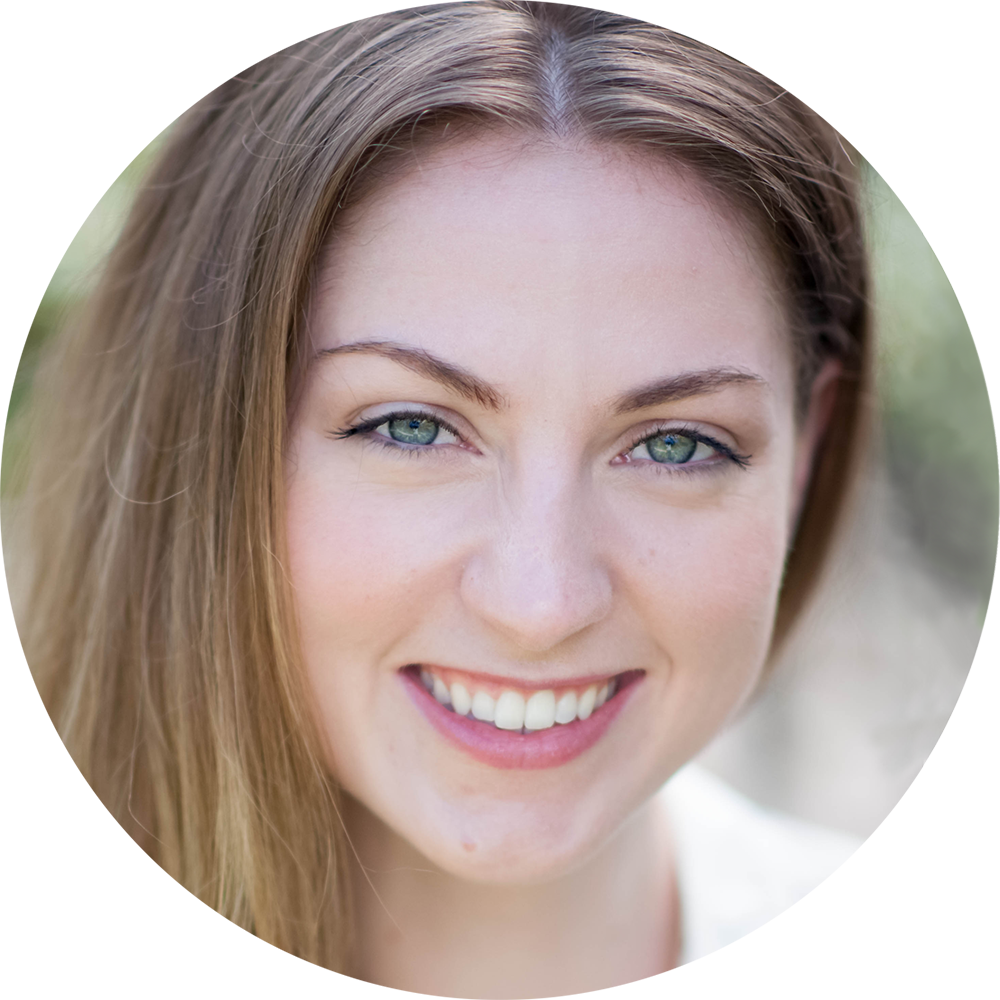 Malia is an Oregon native with performing credits around the world. After graduating from Marymount Manhattan College she went on to tour the country in the mega-musical Evita as Eva Perón. Musical theatre took her to Osaka, Japan where she played the role of Elphaba in the Universal Studios production of Wicked. Upon returning to Portland, Malia has been lucky to grace the stage in roles such as Veronica in Heathers the Musical (triangle productions!), Ariel in Footloose (Broadway Rose Theatre Company), Jerusha in Daddy Long Legs (Broadway Rose Theatre Company), and many more. Music touched her life at an early age and has taken her on the journey of a lifetime for which she is eternally grateful. 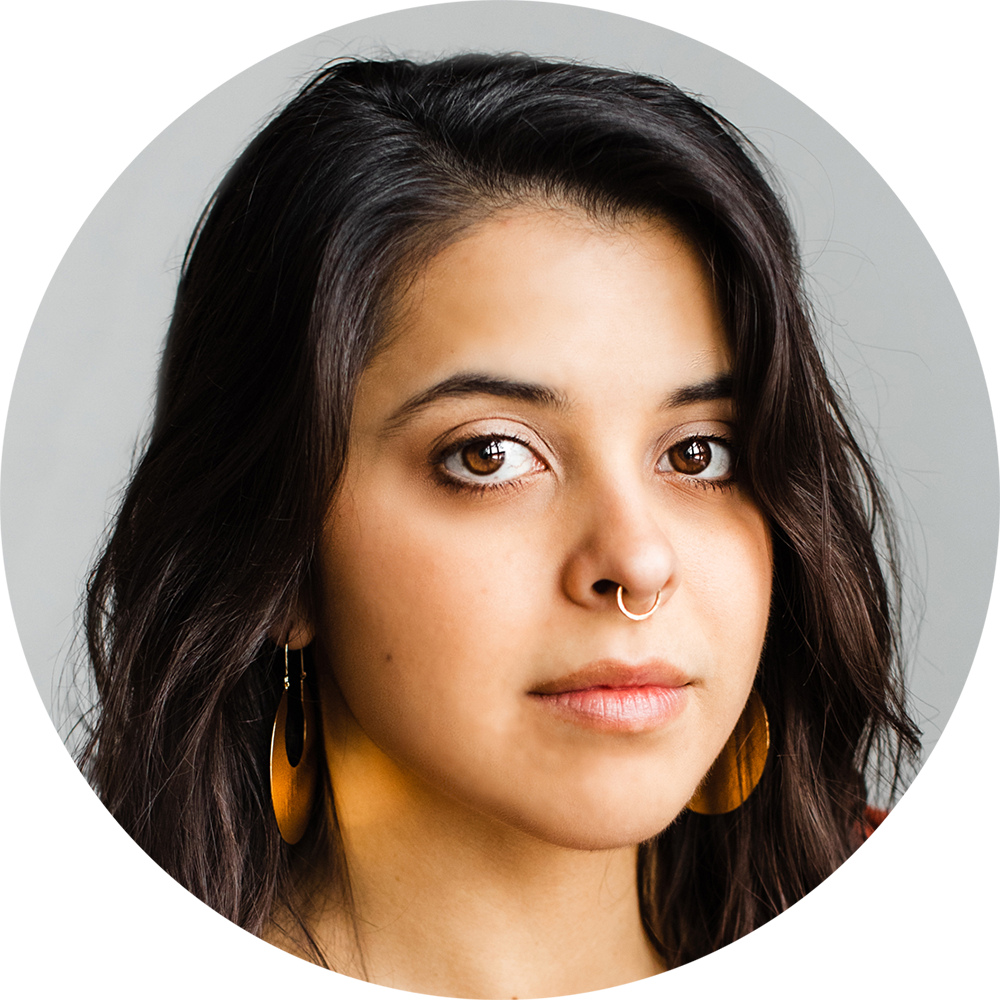 Tara is a singer, actor, and dancer in her hometown of Portland, Oregon. Theater credits include The Bells That Still Can Ring (Portland Center Stage), West Side Story and Once (Broadway Rose), The Music Man (Third Rail Repertory Theatre), The Legend of Rock Paper Scissors (Oregon Children’s Theatre), and the title role in Antigone at the Border (Milagro Theater). Her album, Rise (2019), headlined US and European tours, where she opened for Michael Franti and Gaelynn Lea (NPR Tiny Desk Contest winner). With a BA in Music Education from Pacific University (Outstanding Vocalist, 2013), she teaches music (Pacific Youth Choir, Ethos, C.S. Lewis Academy), and sings with the Oregon Symphony, White Bird, and Resonance Ensemble. Velarde has won awards in dance performance and competition. 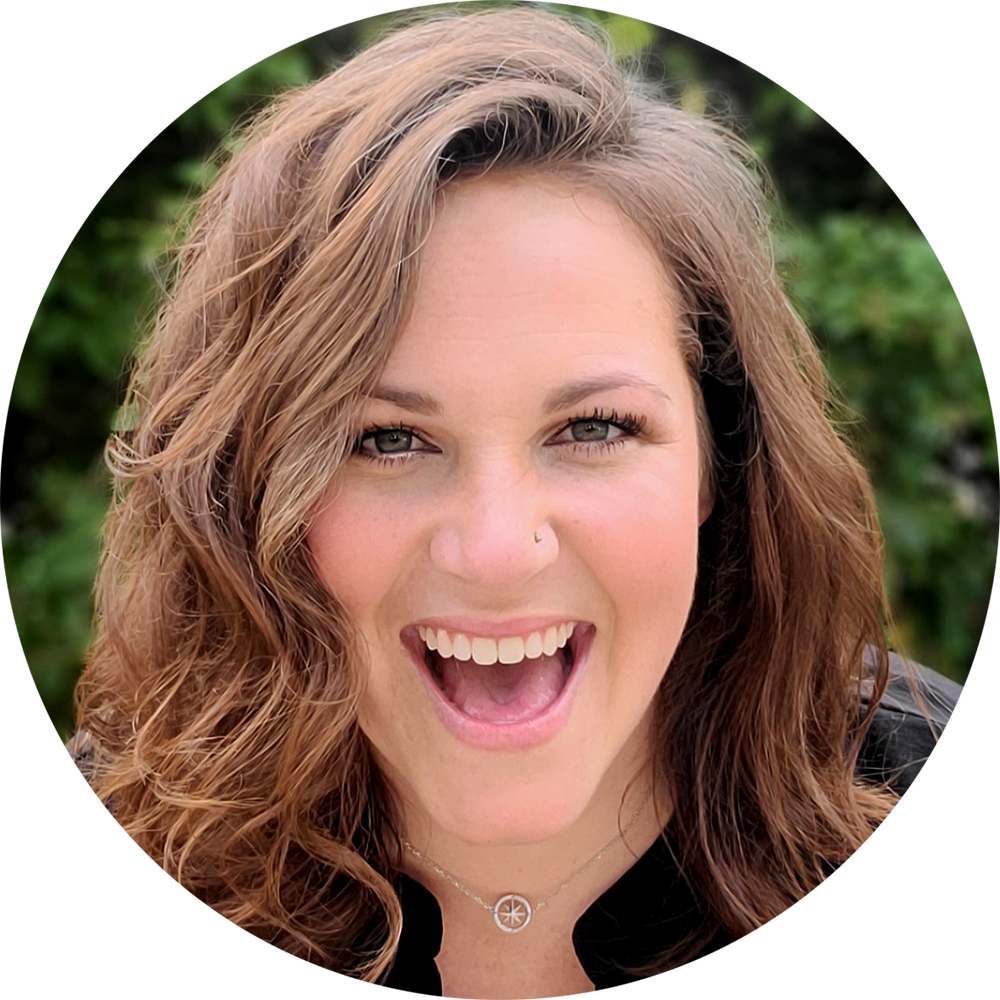 Blythe is excited to be back on the Broadway Rose stage for the first time in 11 years. She was last seen as Tracy Turnblad in Broadway Rose’s production of Hairspray before stepping into her role as Mom to raise her three beautiful children. Blythe is a classically trained vocalist and has studied dance since childhood. She has lived in Oregon with her husband since 2008 and considers herself a true Oregonian now. Whether belting out showtunes with her kids or having living room dance parties, music is what brings light to her life. She thanks her husband, parents, and kids for supporting her on this incredible journey. 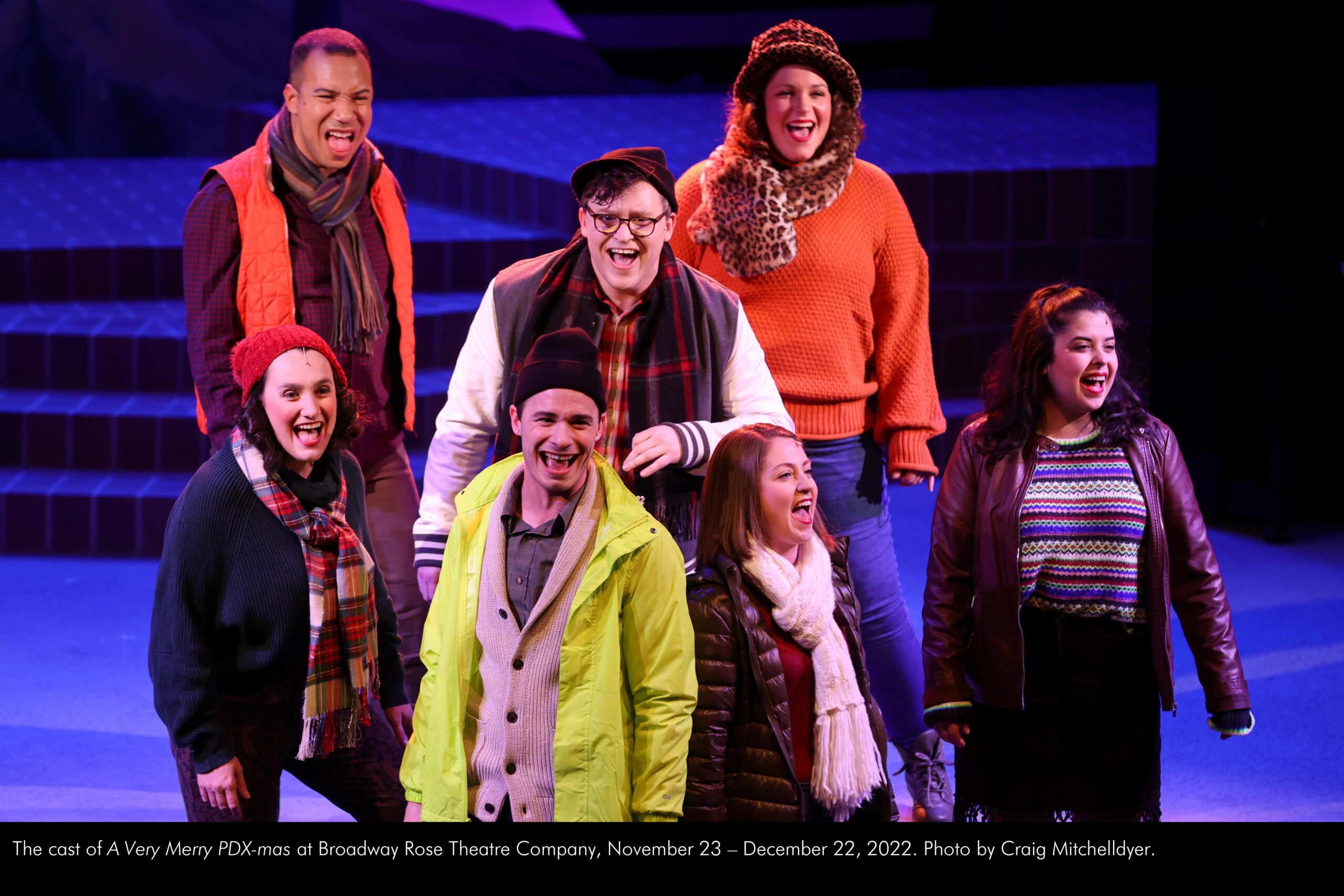 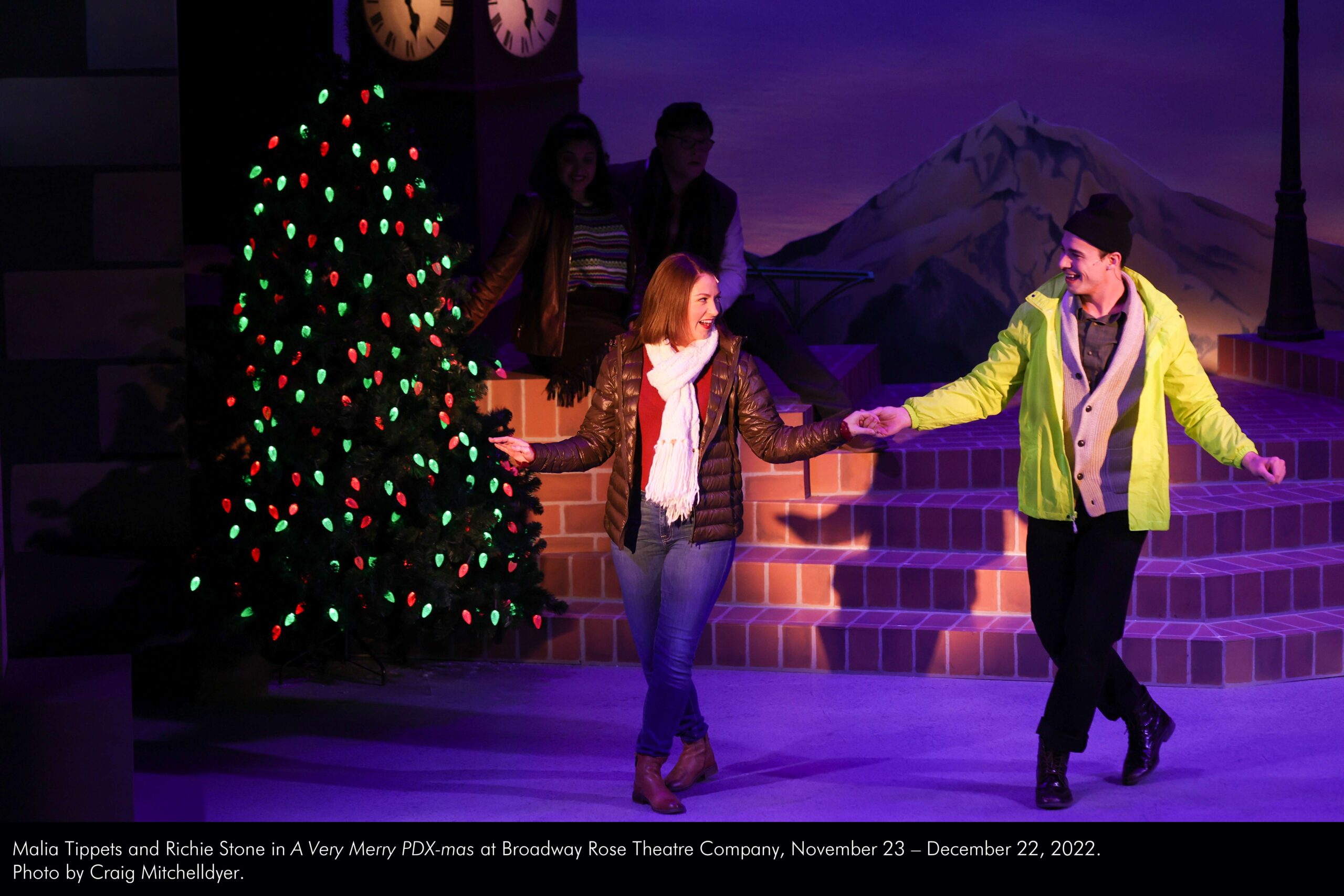 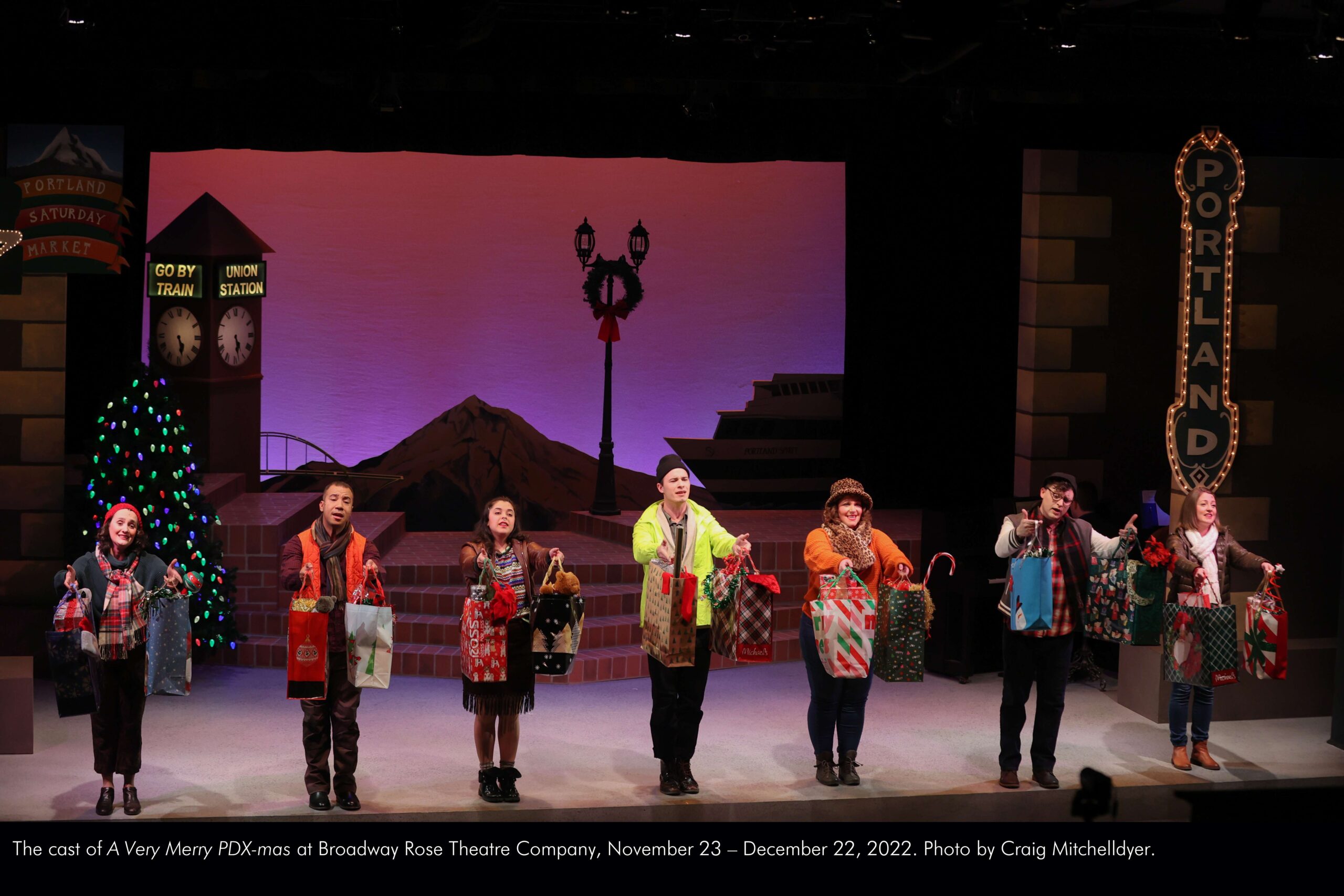 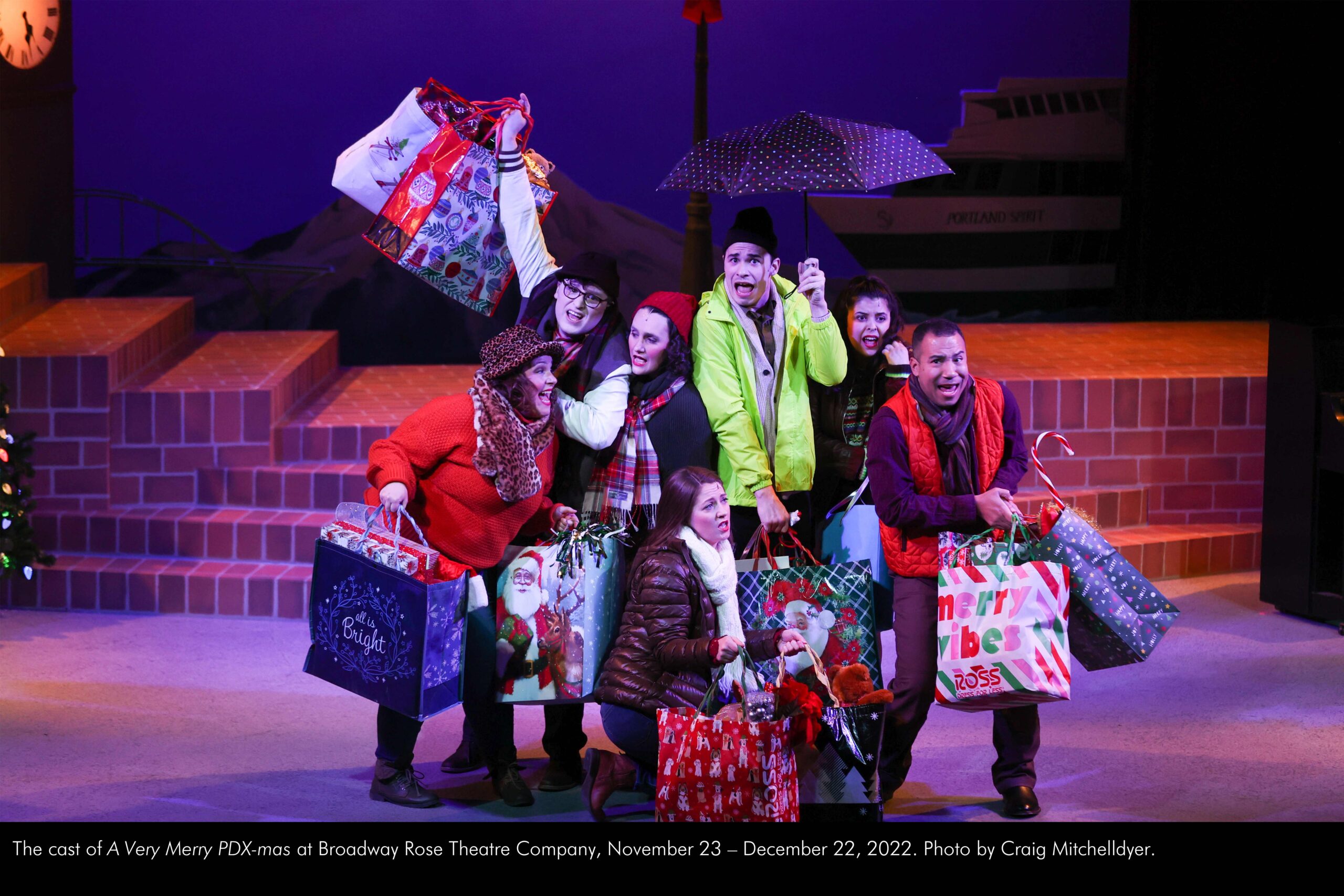 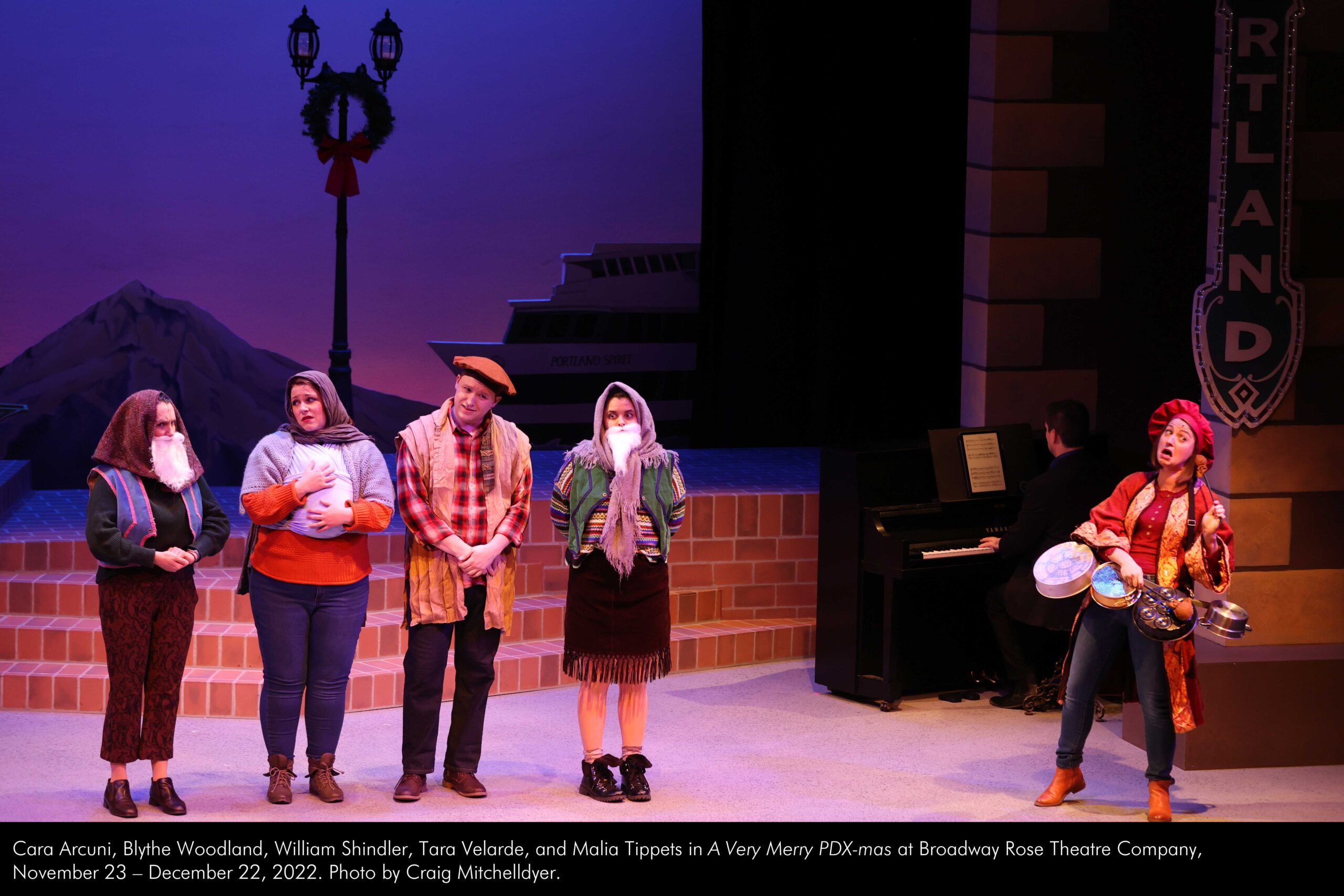 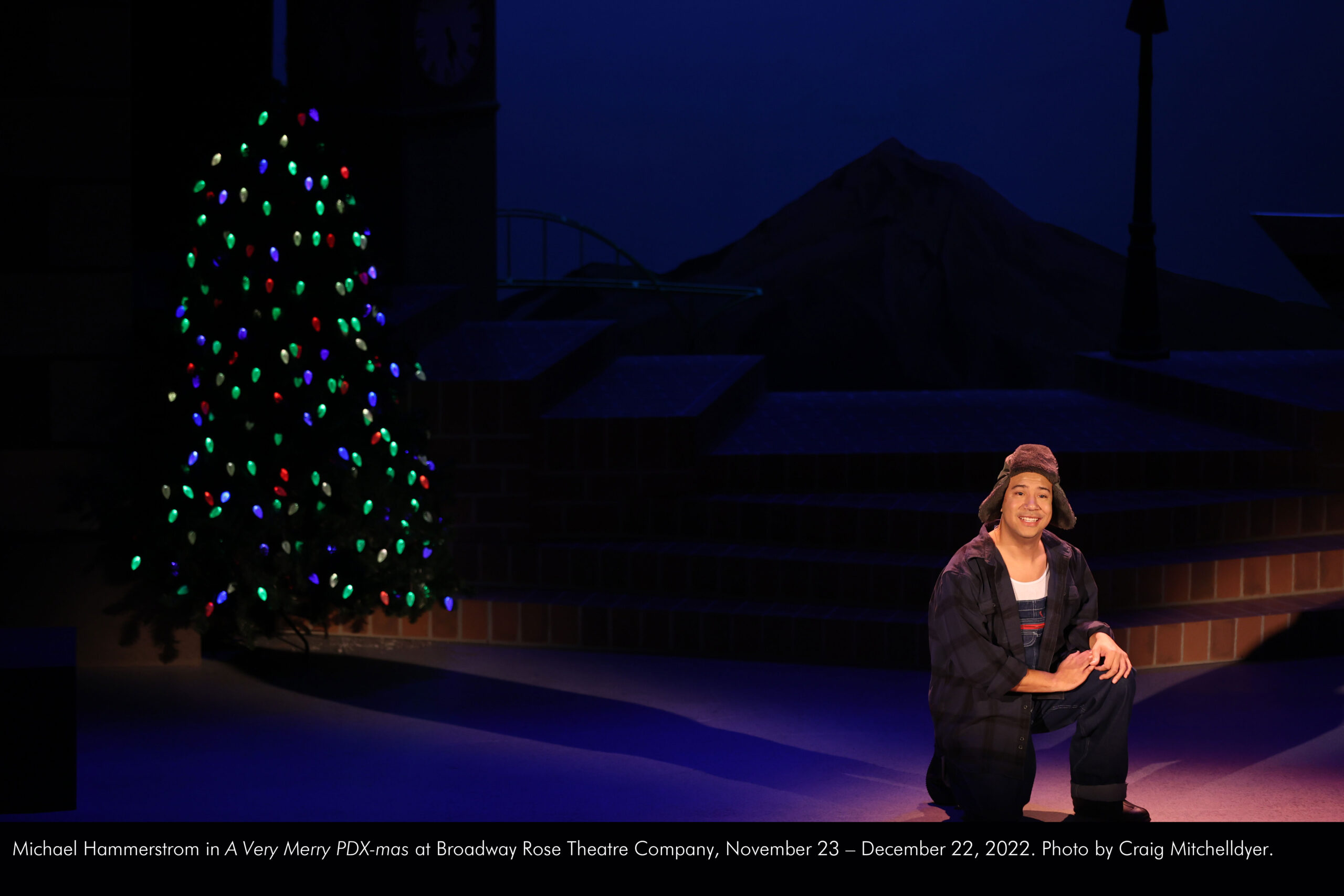 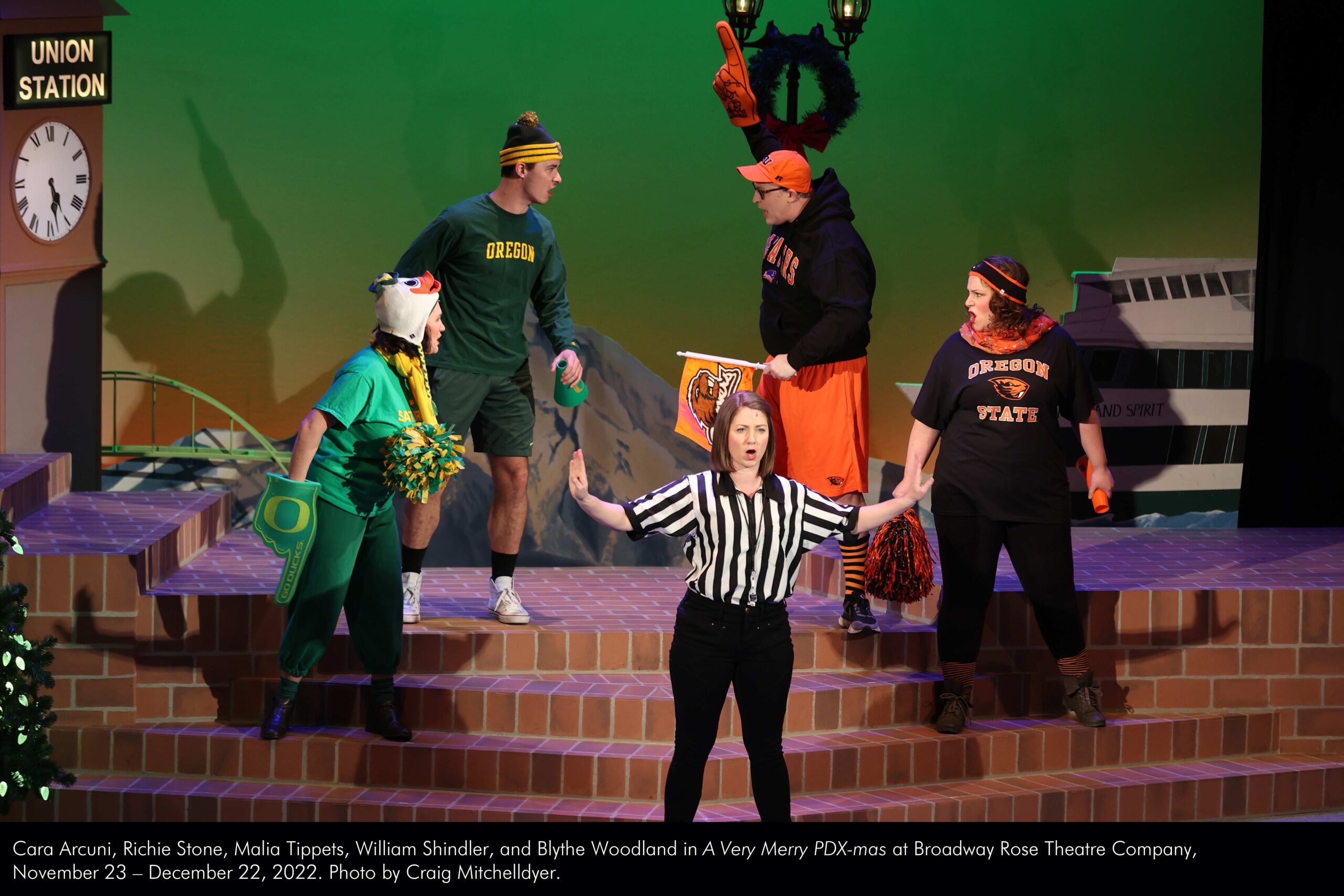 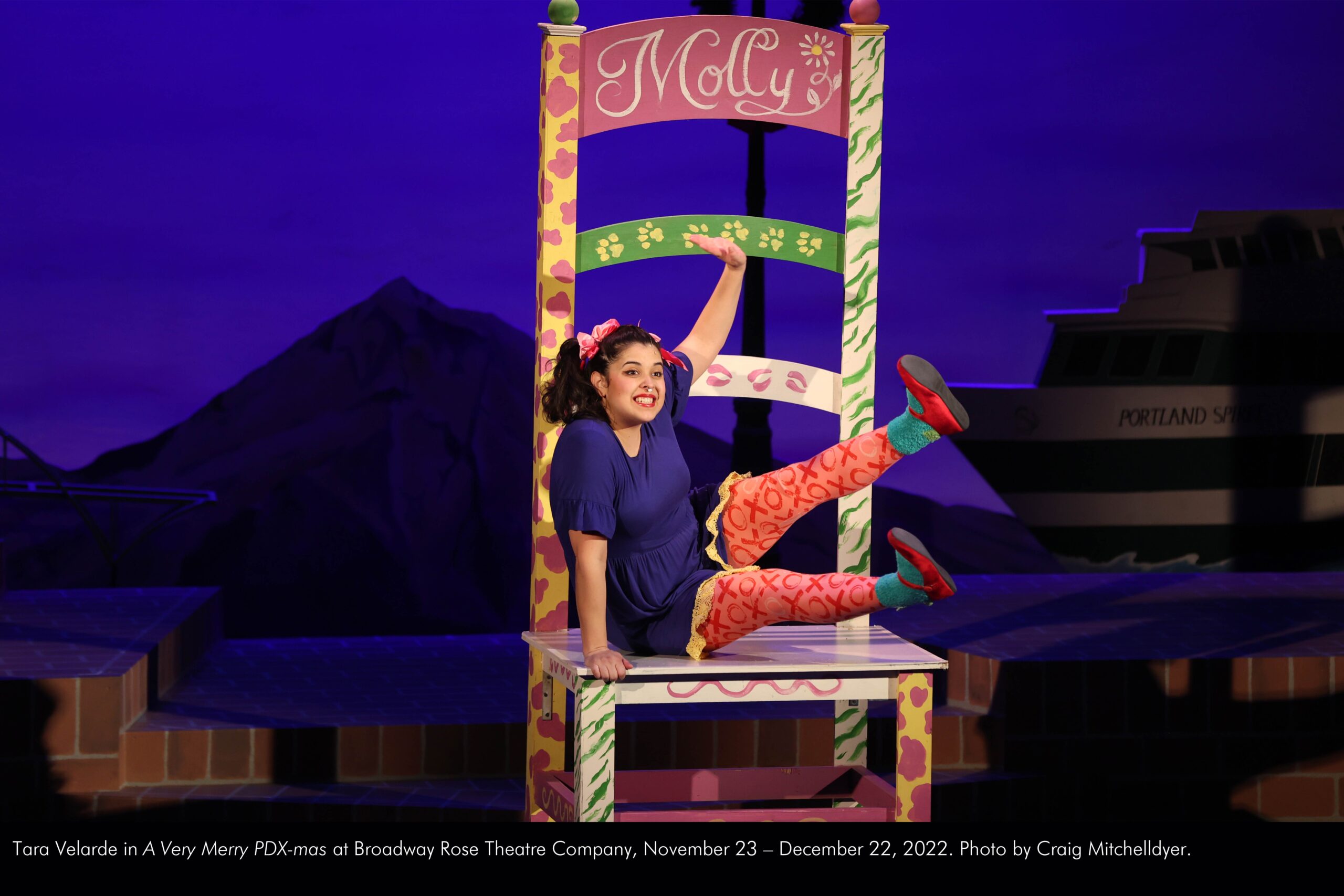 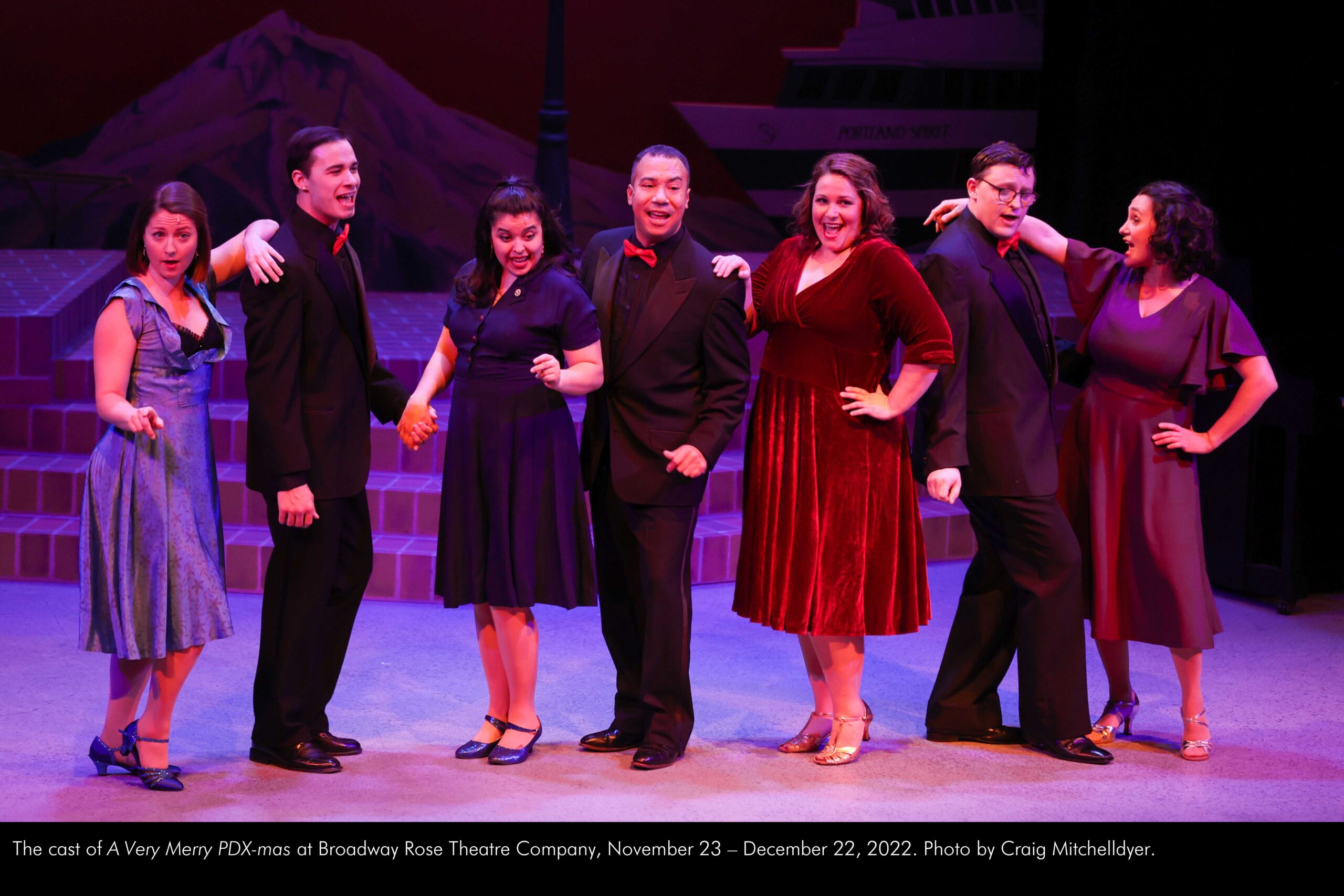 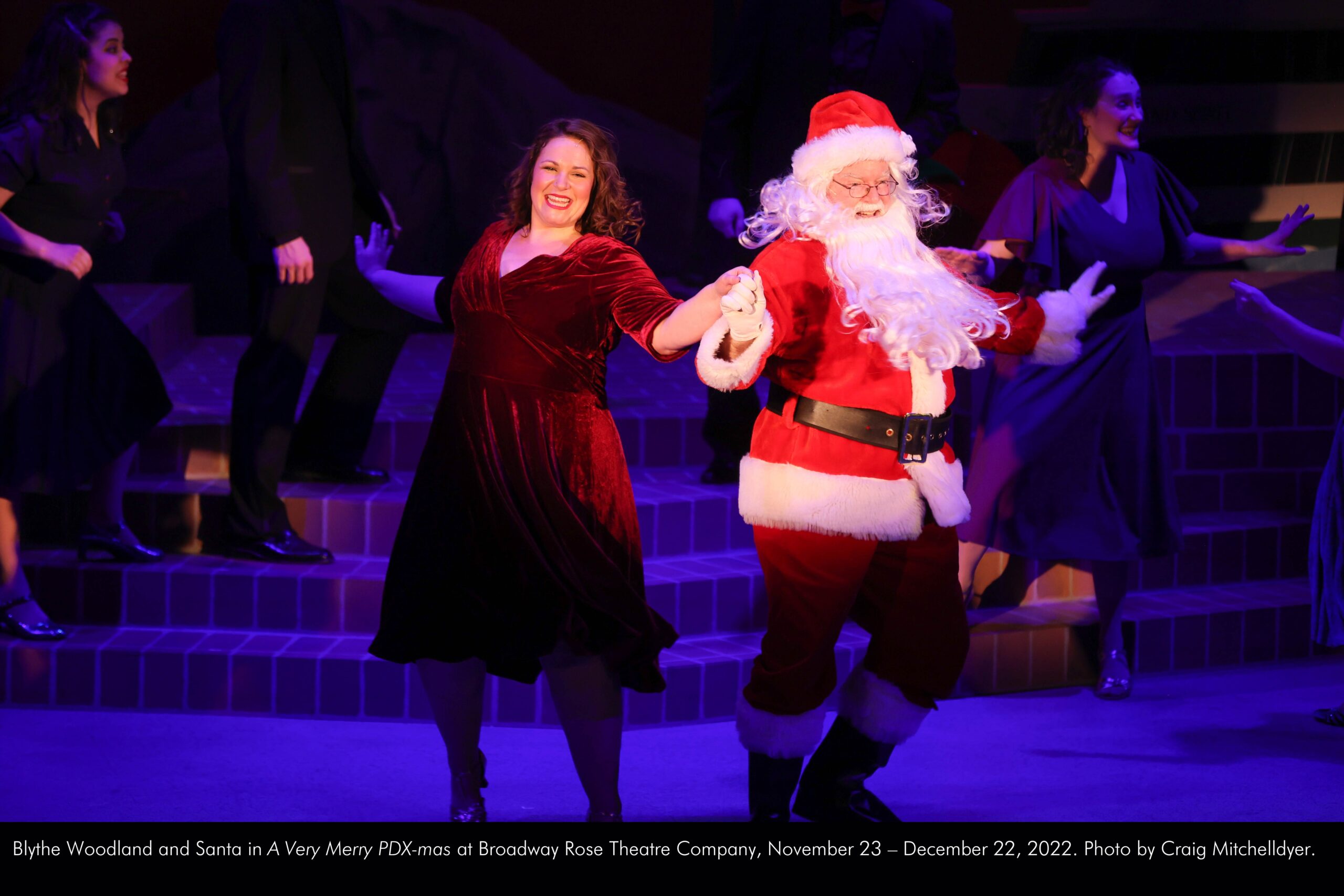 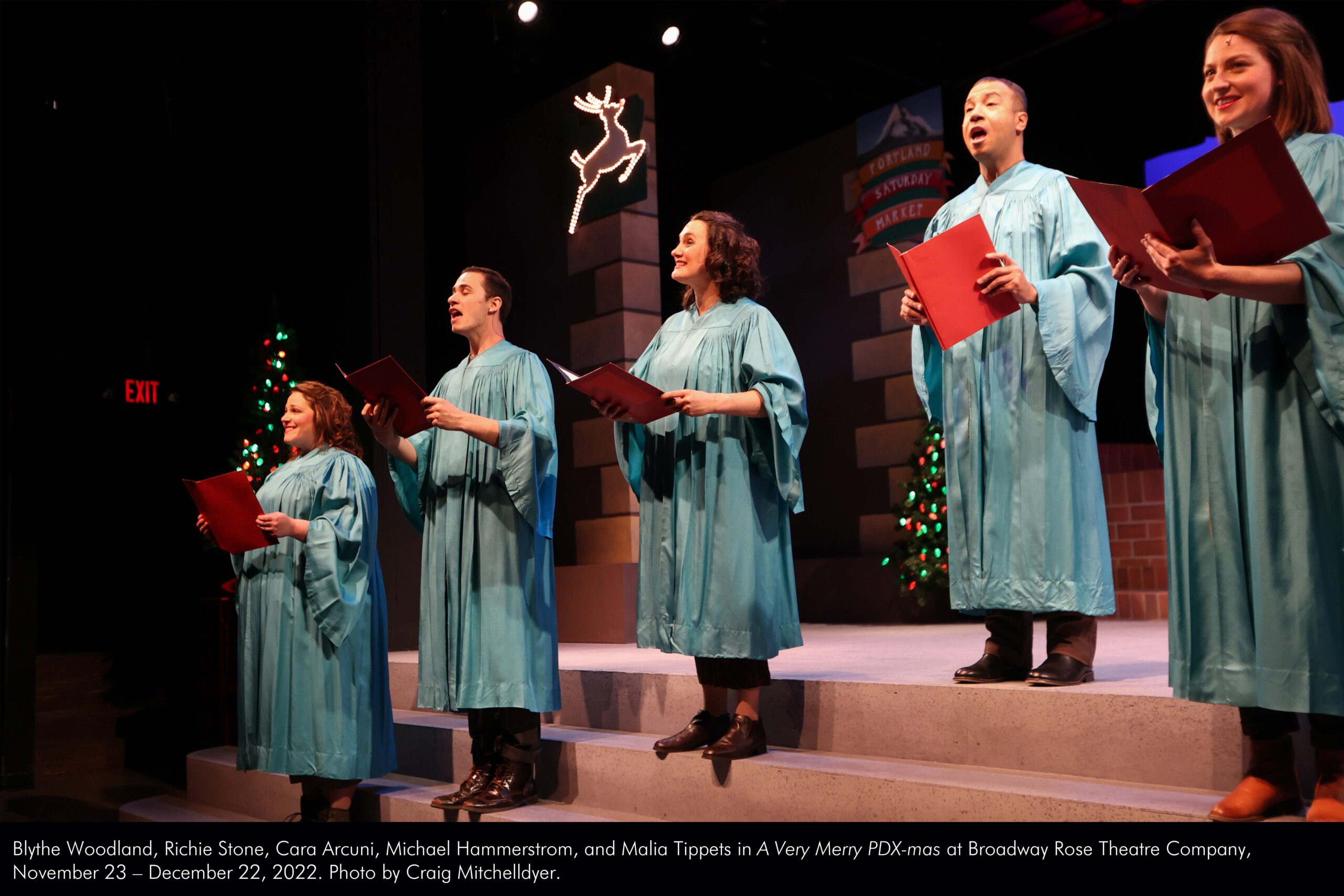 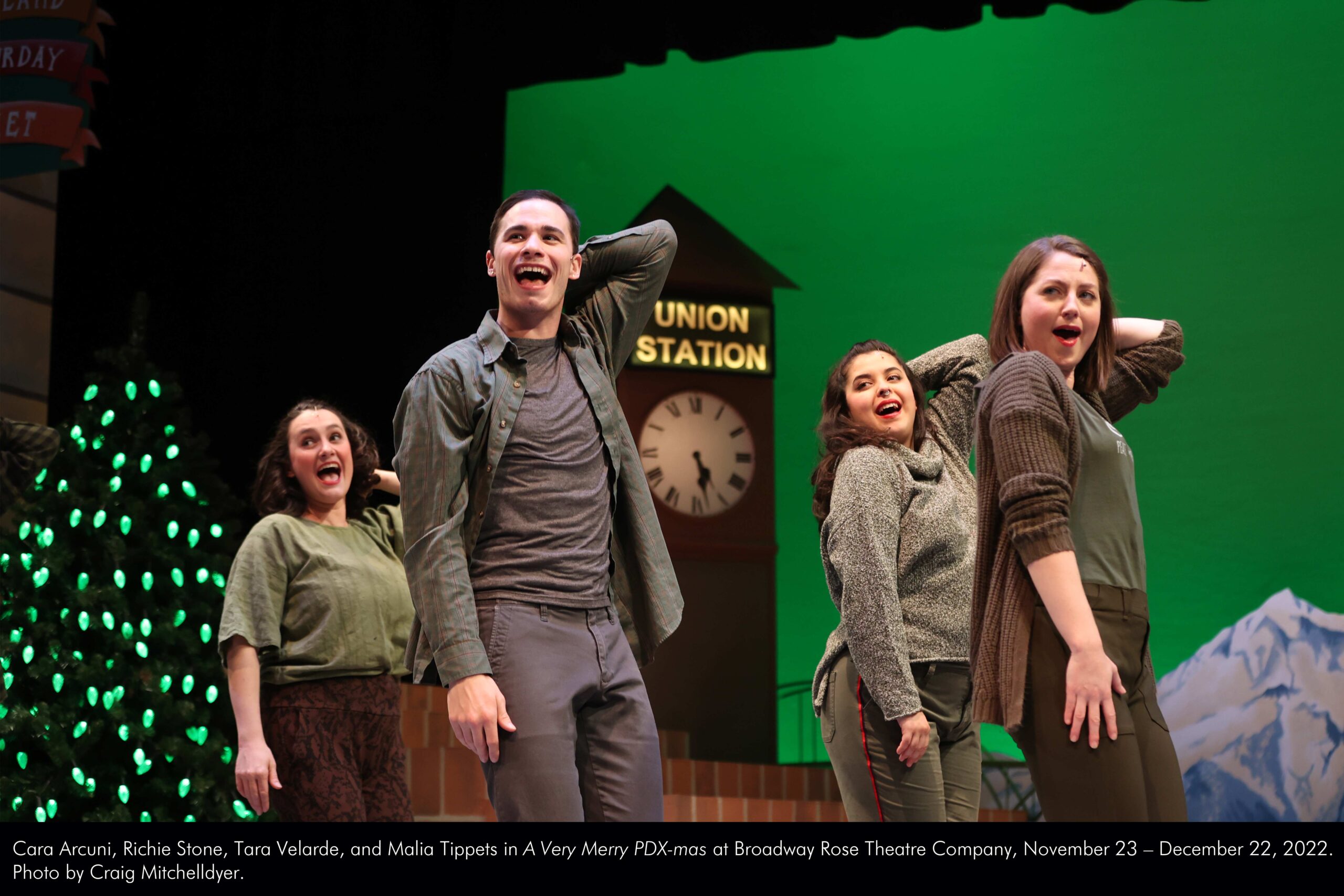 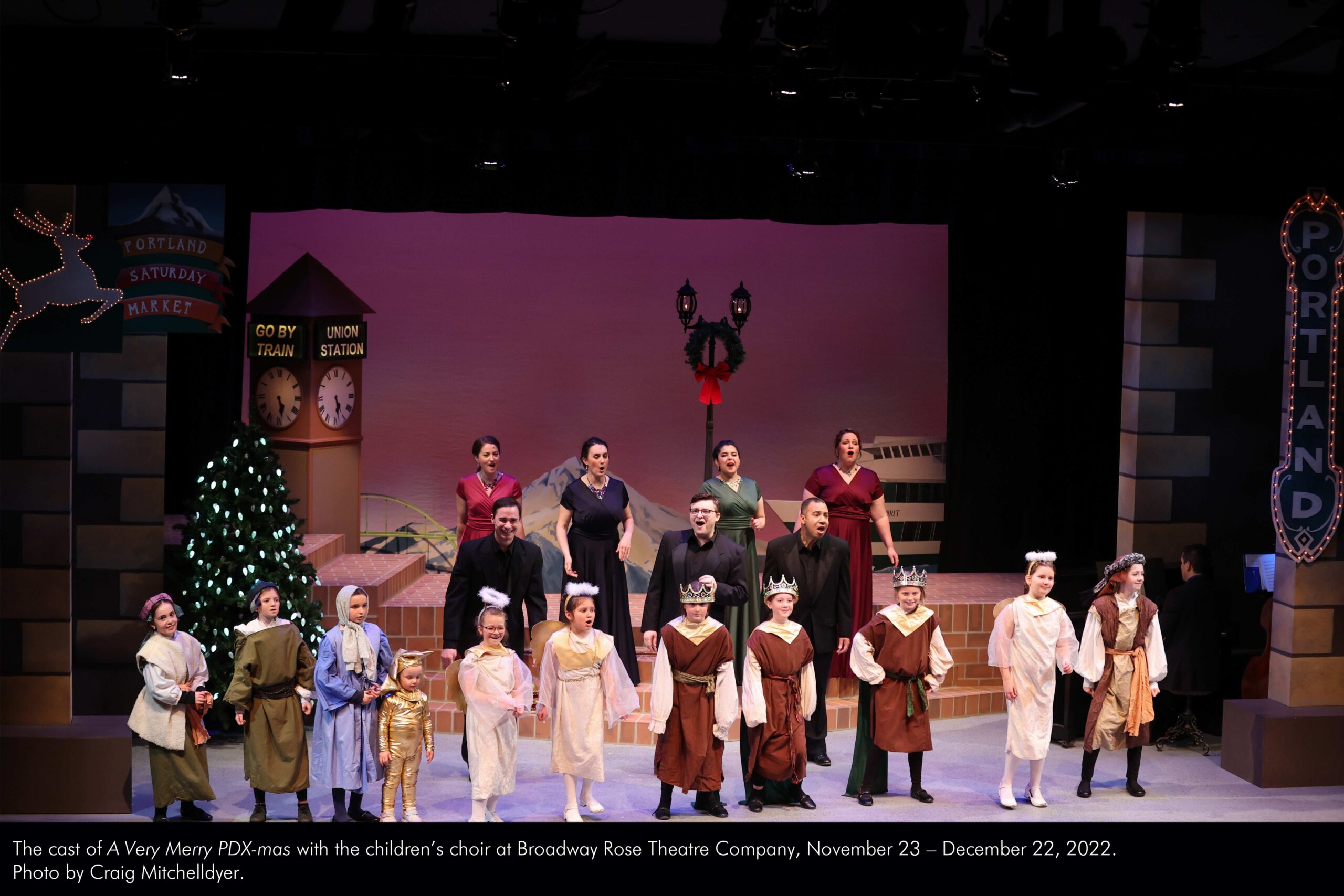 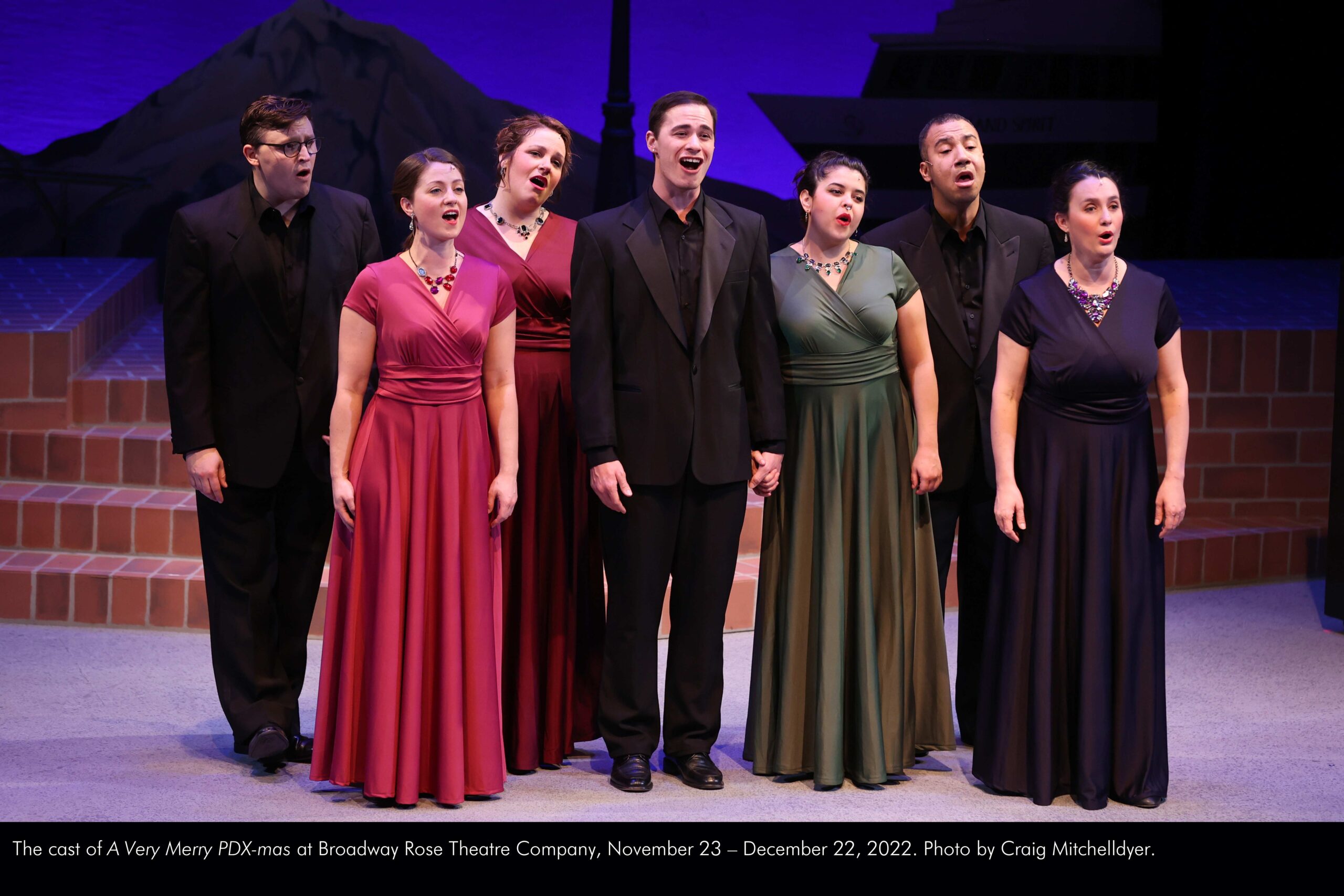